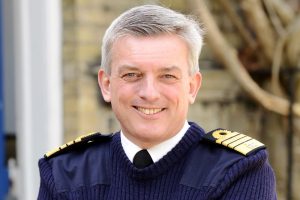 Below is the text of the speech made by Admiral Sir Philip Jones, First Sea Lord on 8 September 2017.

Your Royal Highnesses, my Lords, ladies and gentlemen, honoured guests, 3 years ago, the naming of HMS Queen Elizabeth was a strategic awakening for the United Kingdom.

The moment when we proved to the world, and to ourselves, that we still have what it takes to be a great maritime industrial nation.

Today, we return to Rosyth, to the cradle of modern British sea power, to dedicate HMS Prince of Wales.

We are honoured by the presence of Their Royal Highnesses the Prince of Wales and the Duchess of Cornwall; of course, as we are in Scotland, more appropriately the Duke and Duchess of Rothesay.

We are also joined by representatives from across government, the armed forces, together with veterans and some of our vital international partners.

This ceremony, and all that it represents, demonstrates the United Kingdom’s determination to see through our strategic intent and to fulfil the promise of our maritime renaissance.

For though she is the second of her class, HMS Prince of Wales has a strategic significance all of her own.

If building one carrier is a statement of national ambition; then building 2 is an unmistakable sign of commitment, to our own defence and that of our allies.

Today, HMS Prince of Wales is the newest and most advanced vessel of her kind.

In the half century of service that lies before her, she will assimilate astonishing developments in technology, from unmanned vehicles on the seas and in the skies, to the all encompassing, all pervading, tide of data that is shaping modern warfare.

And yet the name Prince of Wales is a historic one. It is emblematic of many centuries of loyal service to crown and country.

Of the many ships that have borne this princely title, none better demonstrates the importance of our continuing strategic responsibility than the seventh and last.

In the darkest period of the Second World War, the battleship HMS Prince of Wales was the venue for Winston Churchill’s first meeting with President Roosevelt.

During a church service off the coast of Newfoundland, the 2 leaders sat beneath her great guns, amid a congregation of sailors and marines from both nations.

Until that point Britain had stood alone. But on that Sunday morning, onboard that ship, the New World joined the Old in common cause.

Of all the many legacies borne out of that extraordinary partnership, few have been more significant than the Atlantic Charter.

It pledged economic and social progress for the benefit of all. At its heart was a commitment to self determination, freedom of the seas and the rule of law in the world.

This settlement was the inspiration for the United Nations and has been the basis of security and progress in the world since 1945.

It is a settlement under which our own nation has enjoyed 7 decades of comparative peace and rising prosperity.

But today the principles upon which it is founded are being tested.

From the Baltic to the Black Sea, hybrid warfare seeks to undermine democratic governments and sovereign borders.

In the Mediterranean, a sorry tide of human suffering has exposed once again the inequality borne out of conflict and repression.

And in the South China Sea, growing regional competition highlights the continuing importance of freedom of navigation to global stability and prosperity.

The United Kingdom holds positions of international responsibility: other countries look to us for leadership, partnership and example.

So the biggest test of all comes from within.

Do we still have the necessary belief to stand by the principles under which we have prospered?

Are we still prepared to do what it takes to defend them and to lead others in doing the same?

And, most importantly, are we prepared to match our words with the tools to do the job?

Today we are gathered in this great dockyard to answer those questions.

Standing in the shadow of a new Prince of Wales, and in the company of our most important allies, we rededicate ourselves to this historic cause, and to the obligations it brings.

With 2 Queen Elizabeth class carriers in Royal Navy service, one will be available for operations at all times.

In the United States, aviators from the Fleet Air Arm are working hand-in-glove with their Royal Air Force counterparts to bring the F35B Joint Strike Fighter into UK service, and the first operational squadron moves to Marham next year.

This combination of ships and jets will provide our nation with a continuous carrier strike capability, a powerful conventional deterrent in a dangerous and uncertain world.

Alongside this new undertaking, the Royal Navy will deliver the UK’s nuclear deterrent, as we have done every hour of every day for nearly half a century.

These 2 strategic responsibilities will sit at the heart of a modernised and emboldened Royal Navy.

On the River Clyde, steel has been cut for the first city-class frigate, HMS Glasgow. She and her sister ships will carry names from all parts of our United Kingdom, renewing the bond between the nation and its navy.

Meanwhile, after the long years in Iraq and Afghanistan, the Royal Marines have returned to sea, and to the environment in which they have demonstrated such unswerving professionalism and adaptability across 3 and a half centuries.

And finally, the Royal Fleet Auxiliary will continue to be found where they’ve always been in times of peace and war: right by our side.

But this is not a journey our sailors and marines make by themselves.

Working with the Army and the Royal Air Force, the UK Carrier Strike Group will project British power and influence at sea, in the air, over the land and in cyberspace.

And working with our international partners, it represents a new and substantial commitment to NATO and to all the UK’s alliances throughout the world.

We could not have reached this point without the substantial and ongoing support of the United States Navy, the US Marine Corps and the Marine Nationale, and I pay grateful tribute to them today.

We will repay the military and political capital they have invested in us by delivering a comprehensive, credible capability that opens the way for closer carrier cooperation between us.

So the advent of the Queen Elizabeth class carriers truly represents the start of a new era of strategic responsibility for the Royal Navy and the nation.

In drawing to a close, I would like to pay tribute to all those who have dedicated their efforts to this great national endeavour.

In the few short months since she put to sea, HMS Queen Elizabeth has become an icon of British engineering and British innovation, and it was a joyous occasion to welcome her into her home port of Portsmouth just over 3 weeks ago.

The same will be true for HMS Prince of Wales. Wherever she travels, at home or overseas, she will draw crowds to the water’s edge where they will marvel at your achievement.

Alone, either one of these vessels would be a formidable expression of military might. But together, HMS Queen Elizabeth and HMS Prince of Wales send a powerful message to friend and foe alike.

We may live in uncertain times, but the United Kingdom has lost none of its famous resolve. We will protect our interests, we will support our allies, and we will shoulder our responsibilities, wherever in the world they are at stake.

As I consider all that has been accomplished, and that which is yet to come, I am drawn to the words of the poet Longfellow, sent by Roosevelt to Churchill after their historic meeting onboard the last Prince of Wales 76 years ago, words that find new meaning in the vessel before us, and the responsibilities that await the young men and women who will take her to sea:

Sail on, O Ship of State!

Humanity with all its fears,

With all the hopes of future years,

Is hanging breathless on thy fate!