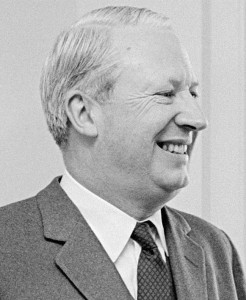 Below is the text of the speech of the then Prime Minister, Edward Heath, in Brussels on 22nd January 1972.

We mark today, with this ceremony, the conclusion of arduous negotiations over more than ten years which have resulted in another great step forward towards the removal of divisions in Western Europe.

This uniting of friendly States within the framework of a single community has been brought about by the sustained and dedicated work of many people. Their efforts were essential to the success which we are celebrating.

My tribute here is to all who have laboured in this great enterprise — not only to those who have negotiated, Ministers and officials, together with the members of the Commission who have contributed so much, but to all who, in their many different ways, have supported and advanced the idea of a united Europe.

Just as the achievement we celebrate today was not preordained, so there will be nothing inevitable about the next stages in the construction of Europe. They will require clear thinking and a strong effort of the imagination.

Clear thinking will be needed to recognise that each of us within the Community will remain proudly attached to our national identity and to the achievements of our national history and tradition. But, at the same time, as the enlargement of the Community makes clear beyond doubt, we have all come to recognize our common European heritage, our mutual interests and our European destiny.

Imagination will be required to develop institutions which respect the traditions and the individuality of the Member States, but at the same time have the strength to guide the future course of the enlarged Community.

The founders of the Community displayed great originality in devising the institutions of the Six. They have been proved in the remarkable achievements of the Community over the years. It is too early to say how far they will meet the needs of the enlarged Community.

For we are faced with an essentially new situation, though one which was always inherent in the foundation of the Community of the Six, which was visualized in the preamble to the Treaty of Rome and which has been created by its success.

Let us not be afraid to contemplate new measures to deal with the new situation.

There is another cause for satisfaction.

“Europe” is more than Western Europe alone. There lies also to the east another part of our continent: countries whose history has been closely linked with our own. Beyond those countries is the Soviet Union, a European as well as an Asian power.

We in Britain have every reason to wish for better relations with the states of Eastern Europe. And we do sincerely want them.

Our new partners on the continent have shown that their feelings are the same. Henceforth our efforts can be united. The European Communities, far from creating barriers, have served to extend east-west trade and other exchanges.

Britain has much to contribute to this process, and as Members of the Community we shall be better able to do so.

Britain, with her Commonwealth links, has also much to contribute to the universal nature of Europe’s responsibilities.

I am not thinking today of the Age of Imperialism, now past: but of the lasting and creative effects of the spread of language and of culture, of commerce and of administration by people from Europe across land and sea to the other continents of the world.

These are the essential ties which today bind Europe in friendship with the rest of mankind.

What design should we seek for the New Europe?

It must be a Europe which is strong and confident within itself.

A Europe in which we shall be working for the progressive relaxation and elimination of east/west tensions.

A Europe conscious of the interests of its friends and partners.

A Europe alive to its great responsibilities in the common struggle of humanity for a better life.

Thus this ceremony marks an end and a beginning.

An end to divisions which have stricken Europe for centuries. A beginning of another stage in the construction of a new and greater Europe.

This is the task for our generation in Europe.