Below is the text of the speech made by Cyril Townsend, the then Conservative MP for Bexleyheath, in the House of Commons on 7 July 1978.

I rise to appeal to our Government once again over the plight of Rudolf Hess. I shall be brief so that other hon. Members from other parties may take part in the debate. I shall not repeat all the points that I made when I last raised the matter in the House on 20th December 1976.

Hess has been in captivity since May 1941. Since 1966 he has been in solitary confinement in Spandau. He is 84 years of age and his health, according to his family with whom I am in close contact, is failing fast. To be blunt, Rudolf Hess may well die before his case is debated again in the House.

I am the current chairman of the all-party freedom for Rudolf Hess campaign. I recently returned from addressing our fellow campaigners in West Germany where, not unnaturally, there is strong feeling on the subject.

The Foreign Office should be thanked for raising this matter yet again with the Soviet authorities which have been vindictive and intransigent. I must express my abhorrence at the petty, outdated, inexcusable regulations that are being applied at Spandau. Is it not monstrous that so long after the war the Government still cannot make available to Parliament the rules laid down by the four Governments at Spandau for prisoners who are in solitary confinement?
I have no doubt that Hess would be willing to swap his prison conditions with those of the most cruel and callous IRA mass murderer in any of Her Majesty’s prisons. No country that calls itself civilised can continue endlessly with the Spandau charade.

I have known the Foreign Secretary personally since long before he became a Member of the House. I am the last person to doubt his humanity or his passionate belief in human rights. But what is going on at Spandau today and every day is inhumane and a total negation of human rights. For example, Hess is not even allowed to consult the lawyer of his choice, Dr. Bucher, the former Minister of Justice in the Federal Republic.

It is the considered view of the all-party committee that the next time that the United Kingdom is responsible for Spandau Hess should be removed to a secure ward in the British military hospital in Berlin. Of course, that step would be supported by America and France. Of course it would incur the displeasure of the Soviet Union, with which the ultimate blame must rest. The Soviet position cannot and must not be the position of the British Government and people any longer. Quite simply, their ways are not our ways, particularly when it comes to dealing with those who are in captivity.

What would the Russians do if we were to break the four-power agreement on Berlin in this minor area? It is clear. There would be a diplomatic flurry. There might be a threat and nothing much more would happen. Perhaps we shall be told by the Minister that if we took unilateral action the Russians would feel deprived of some basic right in West Berlin. But the truth is that Soviet military personnel can move round at liberty in West Berlin, as British military personnel can move round East Berlin in freedom. In West Berlin the Soviets have their own war memorial which they guard every day with Soviet soldiers.

If we never say boo to a goose we shall end up defending the indefensible. Both Funk and Raeder were released on grounds of age and ill health. I should prefer Hess to be released unconditionally so that he can go home to die in peace. But I accept that that might present greater difficulties for the Foreign Office.

I hope that the Government will have a fresh look at the military guard which is supplied every month in rotation by the allied powers. We deploy one officer and 25 men. I do not believe that that is any longer acceptable. Nor is it acceptable to have a little ceremony when we hand over to the next power. Surely we could cut out that cruel military charade, for there is little to be proud of at Spandau at present.

I mentioned the petty restrictions which apply at Spandau. When I last met Wolf Rudiger Hess, Hess’s son, I was told that, for example, when the Soviet authorities are on duty at Spandau they take the old man’s spectacles away at 10 o’clock so that he cannot read in bed. That may be the way to treat a young guards recruit, but is it the way to treat a prisoner of his age?

Hess is allowed only very rare visits, one person at a time, and has never seen his very attractive daughter-in-law. His books and papers are still heavily censored and only recently was he allowed a radio. So far as I know, he is not allowed a television.

I have been closely following this case since I was responsible for guarding Hess at Spandau in the early 1960s. I confess to the House that I sometimes think in the still hours of the night of that enfeebled old man alone in a cold, damp, outdated prison fortress, a stranger to his wife and family, and wonder how it is that in this day and age this cruelty can go on and on, in my name and in all our names—for Britain has a special responsibility in this matter, and the rest of the world recognises that. 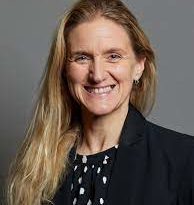 Kim Leadbeater – 2022 Comments on the Attack on Keir Starmer