Below is the text of the speech made by the Secretary of State for Northern Ireland, Theresa Villiers, at a British-Irish Chamber of Commerce lunch on 11th March 2013.

Taoiseach, distinguished guests, ladies and gentlemen; it’s a great pleasure to be here and it’s a great honour for me to be following An Taoiseach, Enda Kenny.

I’d also like to thank Fergal Naughton, Michael Keaveney and the British-Irish Chamber of Commerce for inviting me to address you and for hosting today’s lunch.

The Chamber does a great job in fostering trade links between the UK and Ireland, as the turnout this afternoon highlights.

The economies of both our two countries are inextricably linked. The UK needs a successful Ireland and Ireland needs a successful UK. The flow of goods and services between the UK and Ireland amounts to £1 billion Euro every week. The UK is Ireland’s largest export destination and the Republic is a key market for Northern Ireland, accounting for around a quarter of its exports.

The presence of the Taoiseach here today is testament to the fact that the peoples of the United Kingdom and Ireland have never been more connected. We saw that in the historic visit by Her Majesty the Queen to Ireland in 2011.We saw it in the Joint Statement on UK-Irish relations over the next decade issued by the Prime Minister and the Taoiseach twelve months ago.

And we saw it at the London Olympics – when we cheered the athletes from both our countries and took such pride in all they achieved.

Over the next fortnight, St Patrick’s Day celebrations taking place across the UK will remind us of the huge contribution made by the Irish community to life in our country. In particular, the Irish influence over our culture is unique. The English may have given the world our language but the Irish have shaped our literature in the most profound way over a period dating back hundreds of years.

Rooted in our common history, the relationship between the UK and Ireland embraces cultural, commercial, sporting and family ties. And it’s a relationship that the both the UK and Irish Governments want to see go from strength to strength.

Later today, the Prime Minister and the Taoiseach will hold the second of their annual summits. Our two governments are determined to implement the intensive programme of co-operation set out in last year’s Joint Statement, especially the work to promote jobs and growth.

Here in the UK, the Government has cleared a quarter of the deficit we inherited and over a million jobs have been created in the private sector.There are tentative signs that our economy is healing. The road ahead will be difficult, but it’s the right road.

Our priorities are getting on top of our debts to help keep interest rates low, bringing down business taxes, cutting red tape and creating the right conditions for enterprise to flourish. We are in a global race and only those economies that are fit to compete will succeed.

I welcome the signs of recovery we’re seeing in Ireland’s economy and the huge progress made by the Government there in addressing the debt problems which have beset so many European countries.

The fact that the summit last year and the one today will focus so much on the wider UK-Irish relationship has of course been made possible by the progress that’s been made on Northern Ireland in recent years. And the co-operation between successive UK and Irish governments has been vital to that.

As we approach the fifteenth anniversary of the Belfast Agreement it’s worth remembering what has been achieved:

– Constitutional issues have been settled on the basis of consent

– We have a constitutional settlement which guarantees protection of the rights and identities of both main traditions, both British and Irish

– And UK-Irish relations have been transformed

Most important of all the Belfast Agreement has put an end to the main terrorist campaigns that saw so much tragedy and loss during the thirty years of the Troubles. That’s what been achieved as a result of political dialogue in Northern Ireland.

But as the flags controversy has shown, although we’ve come a long way, there’s still much to be done if we’re to build a genuinely cohesive, stable and prosperous society. In meeting those challenges neither the UK nor the Irish Government will shirk our responsibilities. We will maintain our security effort against those who oppose democracy and want to undermine the political institutions in Northern Ireland through terrorism and murder.

And let me place on record here my immense gratitude to the Taoiseach for the unprecedented levels of security co-operation between our countries. That co-operation has undoubtedly saved lives.

I’d particularly like to thank Eamon Gilmore and Alan Shatter with whom I have had many fruitful and constructive discussions since becoming Secretary of State. Indeed one of the bonuses of my job is the excuse it provides to visit Dublin on a regular basis, a city which has retained all its vibrancy and energy even through the depths of the economic challenges of recent years.

Those are the UK Government’s priorities and they are shared by our colleagues in the Irish Government. Working closely together, we are determined to achieve them.

2013 has the potential to be a great year for Northern Ireland. Derry-Londonderry has already made a real impact as the first ever UK city of culture. In the summer the World Police and Fire Games will attract thousands of visitors. And in June the eyes of the world will be focused on County Fermanagh when some of the world’s most powerful leaders gather for the G8 Summit.

The decision to bring the G8 to Northern Ireland was very much a personal initiative of the Prime Minister and I know it has the strong support of the Taoiseach. It will give us the opportunity to show off the best of Northern Ireland.

The UK and Irish Governments will be working hard together to seize this opportunity to promote Northern Ireland as a great place to visit and a great place to invest. And I am sure we can rely on all of you here to help send out that message loud and clear on the global stage that the G8 summit will give us.

John Denham – 1992 Maiden Speech in the House of Commons 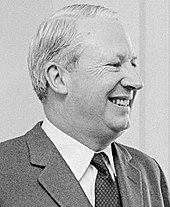