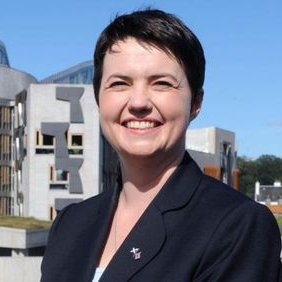 Below is the text of the speech made by Ruth Davidson, the Leader of the Scottish Conservatives, at the Conservative Party Conference held in Birmingham on 1 October 2018.

Friends, it’s great to be back here in Birmingham.

Seven years ago, I came to conference looking to lead the party north of the border.

I promised you I would grow the Conservative family in Scotland. Well, never let it be said, I’m not a woman of my word.

Conference, there are plenty of things I could talk to you about today.

I could tell you about the fantastic work our 31 MSPs are doing in Holyrood, day by day holding Nicola Sturgeon’s miserablist SNP government to account.

I could let you know about the work of our superb 13 Scottish Conservative and Unionist MPs.

Who, day by day, are showing that you can stand up for Scotland, without walking out on the UK.

Or I could talk for days about all the unseen stuff – the work our hundreds of councillors are doing every day for communities right across the country, showing that, contrary to our opponents’ claims; Conservatism isn’t alien to Scotland, but that’s it’s OF Scotland.

Friends, I could talk a lot about all this.

But, actually, what I want to talk about isn’t the day to day of parliamentary speeches or council chamber business.

I want to talk about what matters.

Things that, when you’re about to step back from the front line for a bit – as I’m about to do – are perhaps a little easier to see.

And I want to make a plea.

To look beyond the sound and fury that passes for our politics just now. Where the extremes get ever louder and the centre falls to silence.

Where more energy is expended on twitter spats and below the line comments, than on making it that bit easier for those who come after.

The people whose daily hopes, worries and aspirations should be at the heart of all we do.

People struggling for a deposit, or desperate to get home from work before the nursery closes, or looking to ensure they can receive enough social care to stay in their own home.

These are the people who need to be first in our minds.

And it’s by focussing on their concerns that we do what’s needed – to bring the country back together.

Because there’s no point pretending.

The last two years have exposed some deep divisions in this country – and in this party.

And here’s a safe prediction: in the days and weeks ahead we’re going to hear more of them.

The fact is this: Brexit is happening. One way or another, we need to sort this.

First up – I want to deal with this question of another referendum.

Because over the last few weeks, I keep being asked:

Ruth you voted Remain, surely you’d welcome the chance to try and reverse the result. Why not back another vote?

Why not join all the other people who were happy to support a referendum when they thought they’d win, and are now crying foul and insisting we go through it all again.

Those of us in Scotland have been at this for some time already.

Four years ago, the SNP told Scotland they’d respect the independence referendum result. And for four long years, they’ve been pushing, pushing, pushing to have another go. And to keep going till they get the result they want.

And my response and the Prime Minister’s response has been clear: the people of Scotland spoke. They said No. It’s time to move on.

I don’t get to stand here and profess myself a democrat – to declare that some decisions are so big they can’t be taken by politicians alone – and then demand a re-run just because I wasn’t on the winning side.

And if I tried to argue differently – to insist that one referendum result was sacrosanct while another should be immediately overturned, well, that would make me just the worst type of hypocrite.

So whether you’re Conservative, Labour, Leave or Remain, Yes or No – we must respect the democratic choices we make – or we undermine the principles we all claim to uphold.

But you don’t get to demand a re-run just because you didn’t get what you want.

That way leads to more division, more rancour and a politics trapped in the past.

The people voted. And there is no way to bring this country back together that doesn’t respect the vote.

But here’s the next thing.

These two referenda I’ve fought over the last decade have made one thing obvious: binary choices divide us into camps.

And, now – across the UK – the danger as we enter this crucial period in our nation’s history is that we become too entrenched to reach across to the aisle in search of common ground. That our division on one issue, prevents us from making common cause on others.

Friends, as we approach these crucial few weeks and months, we need to go back to our Conservative principles.

The principles of country, of duty, of practicality and of delivery.

The belief that every prudent act is based on accommodation and accord.

That the best is the enemy of the good if it stops us improving the outcomes for the country.

The attitude that listens, eyebrows raised, to ivory-towered schemes of the ideological puritan and replies: aye, right.

It’s this practical, pragmatic and utterly Conservative approach that will get us through.

Because, when the future of our country is at stake, it is essential.

We can agree a Brexit deal under the Conservatives, or we can risk handing the keys of Downing Street to Jeremy Corbyn.

I know which one I believe is in the national interest. I stand by the prime Minister.

And lastly, if we want to sort this, let’s remember this too.

Two years ago in July, standing on the steps of Downing Street, Theresa May gave her first address as Prime Minister and mentioned something that people tend to forget.

It’s that the full title of our party is the Conservative and Unionist party.

And she said: “That word Unionist is very important to me”.

Yes – ensuring a good future relationship with the EU is important – indeed, vital for our country’s future.

Yes – we must show our friends and allies across the continent that we intend to remain the open, engaged, responsible nation we always have been.

But let’s never lose sight of the fact that the Union that’s most important to us is our own:

the Union of Scotland, England, Wales and Northern Ireland.

Let’s remember that across the UK, there are those who are working day by day to break up that union – and who believe that a chaotic Brexit will help.

Let’s remember this also: the rock upon which this party is founded is a belief in the unity of this country and the enterprise of its people.

So let’s commit to making this our number one priority:

to make sure that the Union – our Union – emerges stronger, not weaker, from these next few weeks – because THAT is what matters the most.

We sort this by respecting the democratic result.

We sort it by using our Conservative values, of putting the national interest first.

And we sort it by always, always keeping our eye on the most important prize of all: keeping our country together.

And if we get that right, let’s remind ourselves where it leads

To a Conservative government getting on with the job.

To a Conservative government doing what we always do:

Getting more people into work, fixing the public finances, supporting people off of welfare, cutting taxes for the lowest paid, helping businesses thrive – sorting out the mess we’re left by a Labour government, getting Britain back in the black.

I know there’s some debate right now about how we respond to Mr Corbyn’s Labour party.

Here’s my advice: folks, just leave him to his Labour takeover.

Let get him get on with compositing motions and allowing deselections of long serving members.

Let him spend his time on that.

And instead, let us get on with facing up to the challenges of the 21st century which need our attention.

By tackling the housing crisis, sorting out planning laws and delivering new affordable homes – so young people starting out in life can buy their first home.

By improving childcare, making it more flexible, freeing up hours – so people can juggle work and family life more easily.

By boosting school standards, putting head teachers in charge, championing vocational qualifications – so there is an education system that works for all.

By delivering security in old age, putting our NHS on a firm footing – so the healthcare supported through work can be accessed in retirement.

And let’s do it not just in England and Wales, but in Scotland too.

People keep asking me: do you seriously think you can beat the SNP?

Damn right I do.

Because Scotland has had enough of the negativity, the grievance, the decade long moan.

Instead, we want to crack on.

So yes, there IS a job I’m after. It’s the job of First Minister of Scotland.

Because I want to lead the country – and leave the SNP’s decade of division behind us.

Instead, to move forward.

To restore our education system, to make us the real Northern powerhouse, to build the homes our young people deserve.

With a clear goal in mind: to make Scotland the best place in the UK to live, to work, and to raise a family.

Conference, I’m tired of talking about the constitution.

I want to get on and boost the country I love.

To focus on what matters to people’s lives.

A home of your own

Time for your family.

But for too many people in our country, it remains a dream that’s out of reach.

Let’s get behind the Prime Minister, so she can get Brexit done.

So that we can throw all our energies on making that dream come true for everyone in this country.

That’s the real challenge before us.

Friends, before I go – it’s my real pleasure to welcome the new leader of the Welsh Conservatives to the stage.

His unveiling was like the best Welsh rugby commentary I’d ever heard.

Paul took his Preseli Pembrokeshire seat off the Labour party in 2007 and has never looked back.

He’s a true servant of the party, a champion of Wales and I look forward very much to working with him in the future.

So Conference, please give a big welcome to Paul Davies.

Volodymyr Zelenskyy – 2022 Speech to Students and Lecturers at Australian Universities