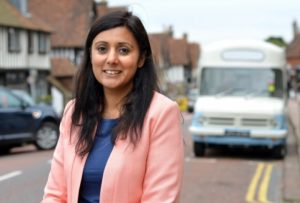 Below is the text of the speech made by Nusrat Ghani in the House of Commons on 1 February 2016.

Marie Colvin was a The Sunday Times journalist killed in Syria in 2012, while reporting from the siege of Homs. She passionately believed that through her work she could be the voice of all those experiencing conflict, from whatever perspective. During the latter part of her life, her determination to be that voice had a physical manifestation: an eye patch, the result of injuries sustained in Sri Lanka, where she was hit by shrapnel as she tried to cross the front line.

“Society urgently requires men and women with courage, passion and integrity to discover the facts that those in authority want to suppress.”

“In an age of 24/7 rolling news, blogs and Twitter, we are on constant call wherever we are. But war reporting is still essentially the same—someone has to go there and see what is happening. You can’t get that information without going to places where people are being shot at, and others are shooting at you.”

The relationship between Members of this House and the fourth estate—our friends up in the Press Gallery—is complicated, but although much of modern-day politics could often be described as a conflict zone, we do not daily put our lives on the line in our place of work. When a member of our armed forces is killed in a conflict zone, the Prime Minister rightly takes a moment at the beginning of Prime Minister’s questions to remind the nation of the sacrifice that that brave serviceman or woman has made. But with the notable exception of people such as Marie Colvin, we do not hear anywhere near as much about the sacrifices made by a large number of professional and citizen journalists every year in the name of newsgathering.

The Committee to Protect Journalists, which I want to thank on the record for its assistance in preparation for this debate, has recorded that 98 journalists were killed last year. It has been definitively confirmed that 71 of them were murdered in direct reprisal for their work; were killed in crossfire during combat situations; or were killed while carrying out a dangerous assignment, such as covering a street protest.

Jim Shannon (Strangford) (DUP) I sought the hon. Lady’s permission last week to intervene. Statistics from the International Federation of Journalists show that 2,297 journalists and media professionals were killed in the past quarter of a century. That is an enormous number. They were standing up for the freedom of speech that we take for granted in this country. Does she agree that the United Kingdom and other liberal democracies should be promoting free speech and liberty across the globe, through the media and through journalism?

Nusrat Ghani The hon. Gentleman makes an important point: the numbers are vast in the past 50 years or so. I hope that the Minister will respond on that, and I will ask him to do so towards the end of my speech. The International Federation of Journalists puts the number even higher than the CPJ, saying that at least 112 were killed last year.

Professional journalists in conflict zones, such as those working for the BBC and Sky, are fortunate to have extensive support from their employers. Employees of those organisations undergo hostile environment training in preparation for travelling to conflict zones to check that they are adequately prepared for the dangers that they will face.

Recently, a member of staff working for a major British media outlet in the middle east was approached by a man who verbally abused him, accusing him of being a traitor and a collaborator. His companions intervened, but another eight people arrived on the scene carrying batons and knives. The journalist ran away and took refuge in a nearby shop. However, two of his companions were heavily beaten up and received hospital treatment from the injuries they sustained.

The incident was reported by the staff member to the high risk team, which subsequently deployed a security adviser to the country to conduct a security review for that individual, and put additional security measures in place to support the staff. However, increasingly, our news comes not just from professional journalists, whose names, faces and employers we recognise, but from stringers and citizen journalists. Stringers are unattached freelance journalists and citizen journalists are members of the public—independent voices.

The ability of citizen journalists to share stories has an effect on professional journalists. The pressure to go deeper into conflict zones is greater. One of the defining features of a war reporter these days is that they are embedded in the conflict. Today, they are on the frontline, or in enemy territory.

Increasingly, we understand that many of the world’s conflicts today are conflicts of narrative. In the middle east, Daesh wants to control what the conflict looks like. It wants a monopoly over stories and images. More than ever, the narrative is what people are fighting over. Daesh wants to recruit with images, and the reality disseminated by journalists challenges that propaganda. Any citizen journalist can break the propaganda machine. Anyone with a phone is an opponent.

Daesh sees journalists as spies. It sees them as western actors who seek to disrupt the Daesh narrative by reporting on its weaknesses and failures, and that makes them a target. The philosopher Walter Benjamin said:

“History is written by the victors.”

That remains true, but the victors, and the course of the fight, are now a consequence of what is written, and that is even more the case now than it was in Benjamin’s time. That makes it even more important that we protect and honour those journalists, whether professional or citizen.

Journalists in conflict zones are not ordinary members of the public. They tell the stories that allow us to understand what is truly going on in the confusion and propaganda of warfare, and they carry out a vital public service.

Nigel Huddleston (Mid Worcestershire) (Con) I thank my hon. Friend for giving way and I congratulate her on securing this very important debate. Does she agree that the pace of news in the modern age means that we can no longer wait for dispatches to be informed about what is going on in conflict zones? Journalists are best positioned to give us this real-time accurate information of what is really going on.

Nusrat Ghani I absolutely agree with my hon. Friend. Conflict is changing incredibly quickly. Lots of chaotic terrorism acts are happening all over the world, and, quite often, we rely on journalists to be our eyes and ears on the ground.

My discussions with journalists and their employers in recent days have highlighted what I consider to be a gap in the service provided by the Foreign Office to those taking risks to bring truth and to hold people to account. Will the Foreign Office consider making it the policy of British embassies and consuls abroad to hold a register of journalists working in conflict zones within the relevant country at any one time? At the moment this process is ad hoc. On registration, the embassy would and should provide a security briefing on the situation in that country or the neighbouring country if it is in conflict, increasing the ability of journalists to protect themselves, and their employer’s ability to ensure that they are acting according to legitimate and expert advice.

The British Government have rightly identified Bangladesh and Pakistan as critical countries in the region and we have partnered with them as a result. Yet in Bangladesh, for example, bloggers are killed by al-Qaeda and others because of what they write. Last year, over 40% of journalists killed in Bangladesh were killed by Islamic extremists because they just disagreed with the words that were written.

In Pakistan in 2006, it is documented that the Government prepared a list of 33 columnists, writers and reporters in the English and Urdu print media and tried to neutralise the “negativism” of these writers by making them “soft and friendly”, and one could interpret that as going a bit beyond a friendly chat. I have more up-to-date testimonies, but the journalists concerned were reluctant for me to raise that on the Floor of the House today. Will the Foreign Office consider making it a requirement that countries that we are partnered with show clear intent to protect the rights of journalists, both professional and citizen? We must not flinch from exporting our proud British values of freedom of the media and of expression.

I will finish by talking about Ruqia Hassan, a citizen journalist in Syria who used her Facebook page to describe the atrocities of daily life in Raqqa, until she went silent in July last year. It has been reported that her last words were:

“I’m in Raqqa and I received death threats, and when Isis [arrests] me and kills me it’s ok because they will cut my head and I have dignity it’s better than I live in humiliation with Isis.”

It has been speculated that her Facebook page was kept open for months so that other citizen journalists could be lured in and so that they too, in turn, could be silenced.

Naji Jerf, a 38-year-old activist who reported for the website “Raqqa Is Being Slaughtered Silently”, was also murdered late last year following his final work, “Islamic State in Aleppo”, which exposed human rights violations in the city. His murderers disagreed with him that anyone should hear about those violations. I believe he is the fourth person from “Raqqa is Being Slaughtered Silently” to have been murdered so far.

Individuals such as these are part of conflict, and through our consumption of news we are complicit in their participation, but they take the risks. We must honour their bravery, and their pride in what they were, and still are, doing, by highlighting their contribution not only to our understanding of what is going on in conflict zones, but also their contribution to ending conflict by shedding light on it, and we must do all we can to defend their right to do what they do, and protect them as they go about it.

Cheryl Gillan – 2011 Speech at the Made in Wales Award Dinner