Below is the text of the speech made by Mike Hill, the Labour MP for Hartlepool, in the House of Commons on 19 July 2017.

Thank you, Madam Deputy Speaker, for giving me the opportunity to make my maiden speech today. As the first person in my family to attend university—on a grant, a wing and a prayer—I know just how difficult it is to survive university, let alone be saddled with debts as a result of tuition fees.

I begin by paying tribute to those who elected me—the most wonderful, friendly, warm-hearted and welcoming people. It is an honour and a privilege to represent Hartlepudlians in this House. I should also like to pay tribute to the town’s previous MPs—Iain Wright, Peter Mandelson and Ted Leadbitter. Sadly, I did not know Ted, but I do know that he was a true and much respected constituency MP, and that is something that I aspire to emulate. I thank Peter Mandelson for his energy and efforts in helping to regenerate the town, for throwing his weight behind some wonderful projects such as our most beautiful world class marina, and for flying the flag for that little known northern delicacy, guacamole.​

As for my immediate predecessor Iain Wright, who could ever forget his true tenacity and ruthlessness as Chair of the Business, Innovation and Skills Committee as he exposed the disgraceful and completely unacceptable exploitation of workers at Sports Direct, or his dogged determination to stand up for British Home Stores workers when they lost their jobs in the blink of an eye and during the pension scandal that followed? Yes, we lost our BHS in Hartlepool too—and yes, Philip Green deserved to lose his knighthood over it.

At the turn of this century, I had the good fortune to land a new job with the trade union Unison. Of all the places where I could have lived in the wonderful region of the north-east, I chose Hartlepool. As I said earlier, the people are warm and welcoming—straight-talking and honest folk. But they were not the only attraction. Hartlepool is a real hidden gem, a beautiful coastal town steeped in history. From Greatham to the Fens, from Elwick village to Hart village, from the prehistoric petrified forest seen at low tide at Seaton Carew to the medieval St Hilda’s church on the Headland, there is history everywhere.

Robert de Bruce is famously connected with the town. It has sitting in a dry dock in its centre one of Nelson’s original flagships, HMS Trincomalee. We have recently welcomed to the town the new Royal Navy museum of the north. The Heugh battery on the Headland, a survivor of the first bombardment of British soil from the sea in the first world war, is a hidden treasure. Hartlepool truly has a wonderful tourist offer, and I am proud to be here to promote it today.

My constituents are no fools—they know their own minds and speak plainly. They voted massively for Brexit; 69.5% was the highest vote in the north-east. But that did not mean that they were converts to UKIP or the Tories, as UKIP found out when it lost its deposit in the general election and as the Tories found out when we increased our majority. I thank the Prime Minister for deciding to go to the polls early. The fact that Hartlepudlians voted in the local football mascot H’Angus the Monkey as their first ever elected Mayor shows their humour and ability to challenge the establishment when they need to.

Unlike the monkey Mayor, I did not get elected for promoting free bananas for every primary school pupil, but I did on the promise that I would fight for those kids, for their schools, for the NHS, for our hospital and for our public services—and against the Government hellbent on breaking them. I pay tribute to all those who supported me in getting elected to this strange place—particularly to my family, who are with us in the Gallery, and to my mother and father, who passed away in February this year. My dad, Mr Robert Hill, from the other monkey town of Heywood in Lancashire, was a true inspiration and he would be proud of me today. Yes, it is true—I moved from one monkey town to another and became its MP. You simply could not make that one up, could you?

My experience here so far has inspired me all the more to do what I promised to set out to do. Hartlepool is a wonderful place, yet it has some of the most deprived wards in the country. Life expectancy for women is the second lowest in the country, and unemployment is significantly higher than in any other ​town in the north-east. It is my job—my determination—to fight tooth and nail in this place against the constant attacks on our people and communities by the failed austerity agenda delivered by a Government who are disconnected and uncaring of our people and communities.

I want to champion and fight for mental health services—mental health is a growing issue emerging from austerity—and, as a former union official, for health workers, who themselves fall ill and often suffer a second-class service when it comes to their own treatment. I want also to champion and fight for the trade union movement and the co-operative movement. I am proud of my co-operative and union roots. I pay personal tribute to all my work colleagues and friends in Unison, particularly my secretary, Angela, and everyone at the Middlesbrough office, who are nothing short of family to me.

I also pay tribute to a true inspiration and giant of the trade union movement, Mr Rodney Bickerstaffe—my friend and the former general secretary of Unison. He is a brilliant man and working-class hero who is currently suffering from a terrible illness and is having an operation today; I wish him well.

I am unashamedly a trade unionist and my constituents know that. They also know that I am a tried and tested campaigner. I am privileged to have their support and to be able to do what I said I would do: fly the flag for Hartlepool, put the town on the map, and fight every inch of the way for the people who elected me.

Gwyneth Dunwoody – 1966 Maiden Speech in the House of Commons 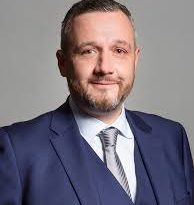 Steven Bonnar – 2022 Speech on the Cost of Living Crisis