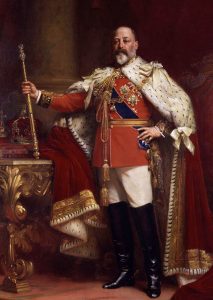 Below is the text of the speech made by King Edward VII in the House of Lords on 19 February 1906.

The lamented death of the King of Denmark, to whom I was united by the closest ties of family and affection, has caused Me much sorrow, and I feel convinced that the sympathy of the country will be extended to Queen Alexandra, who, in consequence of Her severe bereavement, is prevented from accompany Me on the important occasion of the opening of the new Parliament.

The Prince and Princess of Wales left last autumn for India, and are visiting as many portions of My vast Empire as time will admit of. The reception they have met with from all classes has been most gratifying to Me, and I trust that their visit will tend to strengthen, among My subjects in India, the feeling of loyalty to the Crown and attachment to this country.

It was with real satisfaction that I received the King of the Hellenes, who is so closely related to Me, as My guest during the autumn. His Majesty’s visit will, I am confident, confirm the friendly ties which have so long governed the relations existing between the two countries.

My relations with Foreign Powers continue to be friendly.

I rejoice that the war between Russia and Japan has been brought to an end by the satisfactory conclusion of the negotiations commenced last August, and due to the initiative of the President of the United States, which resulted in an honourable peace.

An Agreement has been concluded with the Government of the Emperor of Japan prolonging and extending that which was made between the two Governments in January 1902. Its text has already been made public.

The Conference summoned by the Sultan of Morocco to consider the introduction of reforms into his Kingdom has assembled at Algeciras, and Delegates from the Powers Signatories of the Madrid Convention of 1880 are engaged in deliberations, which still continue. It is earnestly to be hoped that the result of these negotiations may be conducive to the maintenance of peace among all nations.

The dissolution of the union between Sweden and Norway has been peacefully accomplished, and, in accordance with the declared desire of the Norwegian people, My Son-in-law and Daughter, the Prince and Princess Charles of Denmark, have ascended the Throne of Norway as King and Queen.

The insurrectionary movement in Crete has subsided, and the four Protecting Powers have appointed Commissioners with a view to the introduction of reforms in the island.

The condition of the Macedonian vilayets, though in some respects improved, continues to give cause for anxiety. The Sultan has agreed to the appointment of an International Financial Commission to supervise the financial administration of these provinces, and I trust that this may lead to the introduction of salutary reforms and the improvement of the condition of the population.

Papers will be laid before you respecting Army administration in India.

In order to establish responsible government in the Transvaal Colony, I have decided to recall the Letters Patent which provided for the intermediate stage of representative government, and to direct that the new Constitution be drawn up with as much expedition as is consistent with due care and deliberation in all particulars. The elections to the first Legislative Assembly, which had been expected in July, must accordingly be postponed, but it is not anticipated that the additional delay need extend beyond a few months.

The directions which have been given that no further licences should be issued for the importation of Chinese coolies will continue in force during that period.

A Constitution granting responsible government will also be framed for the Orange River Colony.

It is my earnest hope that in these Colonies, as elsewhere throughout My dominions, the grant of free institutions will be followed by an increase of prosperity and of loyalty to the Empire.

The Colonial Conference, which, in existing circumstances, cannot be held this year, has been postponed until the early part of next year, with the concurrence of the Colonial Governments concerned.