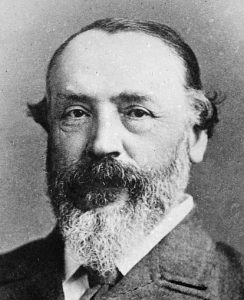 Below is the text of the speech made by Henry Labouchère, the then Liberal MP for Northampton, in the House of Commons on 6 August 1885.

This intervention was important as it became known as the Labouchère Amendment, a controversial measure added to the Criminal Law Amendment Bill in 1885. Charles Warton, the then Conservative MP for Bridport, questioned the relevance of this additional amendment, but it was approved by the Speaker, Arthur Wellesley Peel.

MR. LABOUCHERE said, he rose to move a clause he had put upon the Paper——

MR. WARTON rose to Order, He wished to ask whether the clause about to be moved by the hon. Member for Northampton, and which dealt with a totally different class of offence to that against which the Bill was directed, was within the scope of the Bill?

MR. SPEAKER At this stage of the Bill anything can be introduced into it by leave of the House.

MR. LABOUCHERE said, his Amendment was as follows:—After Clause 9, to insert the following clause:— Any male person who, in public or private, commits, or is a party to the commission of, or procures or attempts to procure the commission by any male person of, any act of gross indecency with another male person, shall be guilty of a misdemeanour, and, being convicted thereof, shall be liable, at the discretion of the Court, to be imprisoned for any term not exceeding one year with or without hard labour.

That was his Amendment, and the meaning of it was that at present any person on whom an assault of the kind here dealt with was committed must be under the age of 13, and the object with which he had brought forward this clause was to make the law applicable to any person, whether under the age of 13 or over that age. He did not think it necessary to discuss the proposal at any length, as he understood Her Majesty’s Government were willing to accept it. He, therefore, left it for the House and the Government to deal with as might be thought best.

New Clause (Outrages on public decency,)—(Mr. Labouchere,)—brought up, and read the first and second time.