Below is the text of the speech made by Gerry Adams on 24th March 1994. 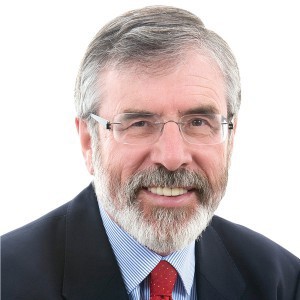 Seventy years on from partition, it is universally accepted that partition has hampered and damaged the economic development of the island. This affects not only trade, industry and agriculture but, by association, all parts of the economy – including employment, health, education and social welfare systems – leaving them marginalised and critically underfunded. The people of Ireland are the victims of this process condemned to lower living standards. Up to £3 billion of funding is lost in so-called security costs every year. The Dublin government spend more than twice as much money every year on border ‘security’ as they do on industrial development.

This fact has been recognised by the business community in Ireland. Plans for an island economy have been endorsed by the Dublin government and the Northern Ireland Office. The plans include import substitution, export partnerships, combined economic planning and infrastructural development.

The belief underpinning this plan is that these moves towards a form of economic unity would boost monetary wealth. A 1991 confederation of Irish Industry report that up to 75,000 extra jobs could be created has been used by a range of politicians to endorse the plans. However optimistic the jobs target seems, it is clear that there is an ability for the current political structures to create an economic environment where efficiencies would create wealth and extra employment.

However, there are two fundamental problems with this process. One is the lack of democracy and democratic control of the economy. The second is the inefficiencies in present structures and policies.

Creating an island economy without creating democratic structures will leave the economy in the hands of a minority of financial institutions and business interests. So far it is Irish Business and Employers Confederation and the Confederation of British Industry that have put in place the structures for this island economy. Democratic control of any economic initiative is a prerequisite.

No better example of why this should be can be found in examining the performance of the Industrial Development Board (Six Counties) and Industrial Development Authority (26 Counties). A 1993 report found that “the manufacturing industry in Northern Ireland has not performed well since partition”. Northern Ireland Economic Research and Social Council stated in 1993 that IDB grants had “acted as a substitute for low productivity”.

In 1993, the IDB admitted that only half the jobs it assisted between April 1987 and March 1989 were still in existence after 12 months. The British Auditor General found that the IDB spent “millions of pounds funding unnecessary projects”. Last year in the 26 Counties, for every new job created by the IDA, another was lost. For this, the IDA spent £154 million. The IDA has spent £3 billion since 1969.

This inefficiency is only one example of the failure of NIO and Dublin government economic policies. The potential benefits of the “island economy” strategy in its present form will be reduced if the failed industrial and economic policies being implemented now in both economies are merely recreated on a larger scale.

There is no doubt that wealth is being created in the 26 and Six County economies. Creating a united economy could increase the potential for wealth creation, but without an economic democracy it will create less wealth and concentrate it in fewer hands.

Recognising that a national economy must reflect everyone’s interests democratically, must be part of the process of building a new Ireland. Irish unity and independence will form the only basis for creating an economic democracy.

Since the IRA cessation last August there has been an unprecedented turn around in public perception and expectations of economic development in the partitioned Irish economy.

This has happened for two reasons:

(1) There is a genuine belief that a lasting peace in Ireland will have a twofold effect on the whole Irish economy. Firstly, both the Dublin and London governments will earn a peace dividend as the financial costs of the conflict dissipate. Secondly, there is a public belief that lasting peace will create a positive economic environment, increased domestic economic growth and increased inward investment.

(2) It now also seems possible that after seventy years of the negative and damaging effects of partition a democratic island economy is a real possibility and that this will also yield a range of positive results for the whole economy.

The Role of the US Government and Investment

Sinn Féin welcomes the decision by the US President, Bill Clinton, to host the White House Conference for Trade and Investment and the other economic initiatives proposed in the 1st November, White House statement.

Sinn Féin recognises that US inward investment has for over 30 years been a significant contributor to employment and economic development in Ireland. The role US investment plays throughout the Irish economy is a crucial one that needs to be examined now more than ever as the prospects of lasting peace offers tangible new opportunities for mutually beneficial inward investment.

The November 1 statement said that the aim of the conference is to “show US companies that sustained peace is dramatically improving business opportunities on the island of Ireland and particularly in Northern Ireland and the border counties. American business should be in on the ground floor of these new opportunities.”

Sinn Féin believes that the chief benefits of any new investment should be in increased employment and enhanced local economic development, particularly in those areas and communities most affected by the conflict.

The history of structured political discrimination in the Six Counties is well documented and a matter of public record.

The responsibility for discrimination against Catholics lay for decades with the unionist controlled government at Stormont which functioned under the Authority of the London government. A system of political, economic and cultural apartheid was institutionalised under this system.

The British government, as the sovereign power, had the ultimate responsibility for allowing this situation to exist.

Since taking direct political control in 1972 the British government has passed two anti-discrimination laws. They have had little impact on the disparity in employment between Catholics and Protestants.

Indeed an internal British government report in September 1992 for the Department of Economic Development concluded that the unemployment differential between Catholics and Protestants is not likely to change over the next ten years.

Catholics are still over two times more likely to be unemployed. (23% of Catholic males are unemployed as against 9% Protestant males.)

It is for all of these reasons that we welcome US concern and interest. President Clinton has brought a particular positive focus to this issue.

The appointment of Senator George Mitchell, the conference for trade and investment and the other initiatives are all evidence of the administrations pro-active interest.

Sinn Féin believes that progressive opinion in Ireland clearly supports the need to address a number of areas in order to enhance the potential for inward investment and to build on the hopes for a lasting peace.

–  Parity of esteem between the two major political allegiances in Ireland and the communities who hold these allegiances.

Investment should complement local economic activity, and not be used as has happened sometimes in the past as a substitute for domestic economic activity. The net result of badly planned investment in the past has resulted in the inward investor and the host local communities both losing out.

Sinn Féin proposes that for inward investment to be at its most effective in enhancing the benefits of a lasting peace, three sets of criteria need to be met.

One, is that new investments meet a set of minimum labour and environmental standards with positive efforts made to site new plants and operations in the most deprived areas of Ireland and to hire workers from the most deprived communities.

Three, is that a new economic strategy for areas most affected by the conflict should be developed in parallel with new investment programmes. It is in the interest of both the investor and the host communities that every effort is made to maximise the benefit of new investment. This could come in the form of aiding the development of support clusters around an inward investing company, or planning strategies to harness the increased employment created by new investments to stimulate other commercial developments in the local economy.

Developing links between local communities and the inward investor is a necessary prerequisite of any new investment initiatives.