The comments made by Ed Miliband, the Shadow Business Secretary, on 11 May 2021.

The Government claims to be serious about tackling insecurity at work. But this legislative programme fails the most basic test of introducing an Employment Bill to improve workers’ rights and tackle the appalling practice of fire and re-hire.

Once again we see the yawning chasm between government rhetoric which says that the epidemic of fire and re-hire is unacceptable and their deeds which is to fail the workers of this country.

The key workers in our country have often been paid the least and had the least security. But rather than learn the lessons of this crisis and answer the call to bring something better, the Government is letting down workers and failing to act to protect them.

Labour would strengthen employment protections including outlawing fire and re-hire, tackling exploitation in the gig economy, increasing the living wage, and transform our unequal, insecure economy. Only Labour will deliver the more secure, fairer economy our country needs. 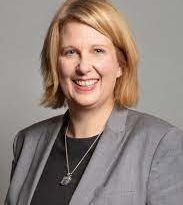 Baroness Symons – 2003 Speech on the UK and Egypt