Below is the text of the statement made by Theresa May, the Prime Minister, in Bratislava, Slovakia, on 28 July 2016.

Thank you, Prime Minister, for welcoming me to Bratislava today. This is my first visit to your country.

As a close partner and current holder of the Presidency of the European Union, I wanted to come to Slovakia early on so that we could discuss how we make a success of Brexit and ensure an orderly departure.

It’s important to underline that while the UK is leaving the EU, we are not leaving Europe or withdrawing from the world. Britain will remain an outward-looking nation – a strong voice for liberal, free market principles and democratic values.

While we remain in the EU, we will continue to fully respect the rights and obligations of membership. And we will continue to be an active player, particularly on your Presidency’s priorities to advance the single market, and on security and foreign policy issues.

Once we have left the EU, we will continue to work with our partners across Europe, indeed Brexit is an opportunity to intensify those relations.

And just as we want Britain to succeed outside the EU, we want the EU to be strong and successful after we depart.

Today, we have talked about the bilateral relationship, our economic and security co-operation, and a range of international issues.

The trade and investment between our 2 countries is flourishing. UK exports to Slovakia rose 37% last year and companies like Jaguar Land Rover and Tesco are all investing here.

So, it matters to both of us that we maintain the closest possible economic relationship once the UK has left the European Union.

Of course, it will take time to define the nature of that relationship, which is why I have said that we will not trigger Article 50 before the end of the year.

We need to find a solution that addresses the concerns of the British people about free movement, while getting the best possible deal on trade in goods and services. We should be driven by what is in the best interests of the UK and what is going to work for the European Union, not by the models that already exist.

We also want to strengthen our security and defence co-operation.

Our armed forces have served alongside one another in Cyprus and Afghanistan and we will remain strong partners in NATO.

And the UK will continue to stand up for our eastern allies. Earlier this month, we agreed to deploy UK troops as part of an increase in the number of NATO troops present along our eastern flank.

And we will continue to send thousands of troops to train with Slovakia and our other NATO partners on a regular basis.

We’ve also discussed how we can work together with our European partners to respond to the migration crisis.

The EU’s collective approach in the Eastern Mediterranean has delivered a significant reduction in the numbers arriving on that route. It shows that returning illegal economic migrants to where they come from does have a deterrent effect and helps to break the business model of the people smugglers and traffickers.

But we both believe that the long term answer to this problem means doing more to tackle the root causes of migration, by working upstream in source and transit countries.

As part of the EU’s response, we’ve worked closely with Turkey. Their co-operation has been crucial, as indeed it is on counter-terrorism. And it is vital that this practical work continues.

Today, we have discussed the recent events there. The UK has condemned the attempted coup and called on everyone to respect and uphold Turkey’s democratic institutions. We continue to call for calm, for due process to be followed and for human rights to be respected.

In conclusion, this has been a valuable meeting.

It has underlined the importance of the UK’s relationships with member states from across the EU – whether large or small, new or old, east and west.

Our common interests and shared values will outlive the UK’s membership of the European Union. And together we must work to advance them, across Europe and around the world.

Madam Prime Minister, welcome to Slovakia. I do hope that you will have lasting good memories from your short visit here to our country. Ladies and gentlemen, we just had a discussion which, quite obviously, dealt mainly with the issue of Brexit. Madam Prime Minister, I highly appreciate and value the fact that you took the trip to our small country on the occasion of holding the rotating presidency of the Council of the European Union and that, on the same day, you will visit Poland, which is holding the presidency of the Visegrad Group of countries.

I would like to assure you firmly that we fully respect the decision that British voters have taken during the Brexit referendum. We take note of the decision, and we also understand that we have to face this decision and not turn our back against it. I think this is an opportunity; an opportunity for both sides to reimagine and redesign a new project of mutual relations, a project that will be equally attractive both to the citizens of the United Kingdom and the European Union.

On the other hand, as the country holding the rotating presidency, we hope to make the best use of the time before triggering Article 50 to redefine the vision for Europe, for the future for the remaining 27 member states, and also to offer a vision to our citizens. We simply have to offer a new vision to our people, otherwise we will see a further fragmentation and destabilisation of European political systems.

I tried to make the best use of the personal meeting we had today and I informed Madam Prime Minister about our intentions for the upcoming Bratislava summit in September. Namely, that we would like to focus especially on the issues of migration and safety, new forms and methods of communication between the European institutions and the general public. We also have to seriously reconsider how the European Union is acting as a global player. And also, we have to offer new projects and new schemes in the economic and social sphere. I’ve always said, and I would like to repeat it again, that the European Union seems to be falling in love with itself. We wanted to be the best in the world, but it seems that many regions in the world are far ahead of us. Let’s use Brexit as a good occasion for revaluating this development.

I’ve also had a chance to discuss with Madam Prime Minister the main topics of interest, the main strategic areas that Britain would like to discuss within its negotiations with the European Union. Quite clearly it’s going to be the issue of migration, although the perception British voters have is slightly different than how we perceive migration on the continent. So, then, the issue of migration is especially the issue of migrant workers from the EU in the United Kingdom. I’ve asked Madam Prime Minister to dedicate a special level of attention to Slovak nationals and citizens who work currently in the United Kingdom. The second area for discussions is obviously the access to the single market and the third area for discussion is the area of safety and security. The EU and the UK have to work together in the future in this field.

To conclude, I’d like to say that the meeting today only reconfirmed my opinion. There is a joint interest to create such a vision of the new relationship between the United Kingdom and the European Union that will be attractive for both sides, for the United Kingdom and for the European Union. I’d like to thank Madam Prime Minister for this endeavour and also for this vision.

On our armed forces. Only last week you have discussed at a possible nuclear deterrent in the Lower House of your Parliament. Are you ready to use nuclear weapons as a deterrent against the threat from Russia?

We have indeed, as you say, discussed the issues of our defence co-operation. I think that is very important and as I indicated, we want to continue with that co-operation. We have indeed had a significant vote recently in the House of Commons in our UK Parliament, to continue to renew our nuclear deterrent. I was asked in that debate whether I was prepared to use the nuclear deterrent, and my answer was yes.

There are an estimated 90,000 Slovaks living and working in Britain and obviously free movement is one of the most crucial aspects of this country’s membership of the EU. Yet you said on several occasions that the British people have made their voice absolutely clear on free movement via the Brexit vote. It seems like this is a red line for both sides. Do you see any area for compromise?

Well, I think you’ve raised 2 issues there. First of all, yes, you’re correct. There are several tens of thousands Slovakian citizens living and working in the United Kingdom and I’ve been clear that I expect to be able to guarantee and protect the rights of Slovakian citizens and other EU citizens living in the UK, and would intend to be able to protect those rights. The only circumstances in which that wouldn’t be possible, would be if the rights of British citizens living and working in other parts of the European Union were not protected. I’m grateful we had a discussion over lunch and that concept of reciprocity, I think, is recognised.

On the question of free movement, there was a very clear message from the British people in the Brexit vote that they did not want free movement to continue as it had done previously. They do want some control in the movement of others coming from the European Union into the UK, and we will be obviously looking to deliver that as part of our negotiations as well as looking for the best possible deal in trade and goods and services. And I think it’s in the interest of both the United Kingdom and the European Union that we’re able to see a smooth and orderly process of negotiation, leading to a smooth and orderly exit for the UK. And that we do see that we get maximum benefit in economic terms when the UK has left the European Union. 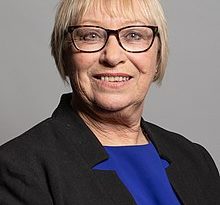