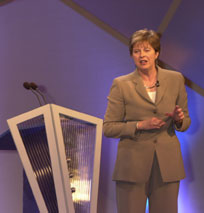 Below is the text of a press release issued by Theresa May, the then Shadow Secretary of State for the Family, on 24 August 2004.

Labour’s plans to improve access arrangements for children whose parents split up will prove to be a big disappointment, Theresa May has warned.

The Shadow Secretary for the Family accused Government ministers of “papering over the cracks” rather than addressing the real problems at the heart of Britain’s family justice system.

In a Green Paper being published by the Department for Constitutional Affairs, Labour is seeking to encourage separated parents to embark on a mediation process to find agreement on access and control over their children, rather than going to court. However, the Government has rejected the idea that parents should be guaranteed 50-50 access to their children, claiming that offspring cannot be divided up “like property” after a marriage founders.

Commenting on the proposals, Mrs May described the package as “a huge disappointment for families up and down the country”, and declared: “Rather than address the real problems at the heart of our family justice system, this Government would rather attempt to paper over the cracks. This is just another false dawn for all those many heartbroken parents and grandparents trapped for years in the courts and denied contact with their children.”

Highlighting the absence of a presumption in favour of equal rights for parents to have an influence on the upbringing of their children, Mrs May said: “This has meant that parents with residence have found it far easier to obstruct the other parent’s access to their children and their ability to have a say in how those children are brought up. Government must redress that imbalance.”

She added: “The Government has failed to grasp the real problem at the heart of the current system. What parents want is proper quality parenting time with their children, not the availability of more contact centres and warm words about ‘parenting plans’. Children need to have contact with their mothers and fathers if at all possible. The best parent is both parents. We need to ensure that children grow up with mother and father, and where ever possible Grandparents playing a full and active role in their upbringing.”