Below is the text of the speech made by Stephen Twigg, the Shadow Secretary of State for Education, made at Labour Party conference on 4th October 2012.

And thank you to Dave and Joan, you inspire us all. It’s a privilege to do this job when you meet young people like Joan. She came here having claimed political asylum.

Despite all the barriers, she became a grade A student. Conference – she is One Nation Britain.

I learned aspiration from my Mum. A bright girl from the East End of London, she left school at 15. My Mum always told me, “That’s not going to happen to you. You’re going to university.”

I also had great teachers. Funnily enough, one of them was called Mr Coward.

Mr Coward gave me the courage to become the first pupil from Southgate Comprehensive to go to Oxford. He shows the power of a great teacher.

I say this to Michael Gove – stop running down our teachers and young people. Celebrate their ambition instead.

I love doing this job, but I couldn’t do it without the support of the frontbench team.

So thank you to Sharon, Kevin, Karen and Lisa in the Commons and Bev and Maggie in the Lords.

And thanks to my Policy Commission co-chair, the GMB’s one and only Mary Turner. Thanks Mary.

Our central challenge is how to get our economy growing.

We’re not the biggest nation. So for a country like ours, it’s smart to be smart.

Education isn’t just a moral right, it is an economic good too.

The Tories claim they want high standards. But they’ve put standards at risk. The biggest cuts to education since the ‘50s, and teacher numbers falling.

Young people held back. Like the thousands who lost out, when their GCSE English was downgraded.

So much for “we’re all in this together”. His message to young people is – you’re on your own.

It’s no wonder that One Nation Conservatives don’t agree with him. Ken Baker, the former Education Secretary says Labour is right on vocational education, and the Conservative MP Graham Stuart says Michael Gove’s new exams are ill conceived and incoherent.

We know Michael Gove is wrong, but even Conservatives think he’s extreme and out of touch.

He claims to be in favour of rigour. But he is totally outdated. Rote learning and regurgitating facts. An exam system from the 1950s.

We believe young people need both knowledge and skills. The rigour of the future, not the past.

As well as the basics, we need creative subjects like music, design and art.

And practical subjects like engineering and IT. But what do the Tories do? They focus only on the Ebacc and say the engineering diploma, a course designed by Rolls Royce, is worthless.

How out of date can you get?

In primary school, companies should provide ‘work discovery’ programmes and in secondary school, every young person should get work experience linked to their studies not just two weeks of photocopying.

Labour will meet the challenge of every young person staying on until 18.

As Ed said on Tuesday, there is already a clear path for those who do A Levels and then go to university.

But we need a clear path for the forgotten 50 per cent.

So we will create a new, gold standard vocational qualification – the Technical Baccalaureate.

Michael Gove wants narrow, elitist education. We are the party of One Nation education.

Instead of going back to O-levels, we will look forward. Instead of coming up with a plan on the back of an envelope, we will engage the experts – in business and education.

So I am delighted to announce today that Professor Chris Husbands, from the Institute of Education will be chairing a taskforce to take forward these ideas.

Every young person must study English and Maths until 18. Incredibly, we are one of the only developed countries in the world that doesn’t require this.

Barely one in ten pupils who are on free school meals at age 11, study English and Maths after the age of 16.

That is a huge injustice. So I hope you will join our campaign, by signing up on the website or tweeting using the hashtag “3Rsto18”.

We will build this One Nation Education system by raising standards for all.

Take Joan’s school, United Learning’s Paddington Academy, set up under Labour. Five years ago, only a quarter of pupils got 5 good GCSEs. Now, three quarters do and they sent their first pupil to Cambridge.

That’s raising aspiration for you.

Or take Barlow Hall Primary, here in Manchester. In 2004, standards were well below average. Today, with a cutting edge Reading Recovery centre, it is a school transformed.

We take on those who say “you can’t turn coal into diamond”.

I want every school to have the freedom to innovate, not just some. To shape their own curriculum. To develop specialisms. To have a longer school day.

Alongside freedom comes responsibility – strong schools should work with weaker schools to raise performance for all.

And all schools should ensure pupils get a minimum of two hours of PE a week, and that every pupil in every school gets a healthy meal.

Because when it comes to a fight between Jamie Oliver and Michael Gove, I know whose side I’m on.

So, all schools with extra rights, and extra responsibilities. One mission: raise standards for all.

What about free schools? On the one hand, some of them are good.

School 21 in Newham. Popular with parents. They use groundbreaking techniques to raise standards for some of the poorest children.

Labour can’t be against schools that drive up standards and narrow the gap in life chances.

But there are serious problems with Michael Gove’s centralised Free Schools programme.

He thinks the way to build new schools is to throw darts at a map. So while there’s a crisis in primary school places, Free Schools are built in areas with spare places.

And unlike Labour’s academies, there’s no focus on under-performance or social and economic need.

I say – engage with local parents and communities, and you won’t end up with the chaos and waste of schools that don’t open or are half empty.

Instead of decisions made in Whitehall, we will restore a partnership between local and central government and end the practice that stops good local authorities setting up new schools.

And whatever the type of school, whether academies, co-op schools or community schools, we will put local communities and parents back in the driving seat.

But the key to One Nation Education is not the type of school but what happens in the classroom. Our education system is only as good as its staff.

Michael Gove insults teachers – calls them “whingers” – and on his watch 10,000 have left the profession.

We should celebrate the school workforce – not just teachers and heads, but the caretakers, the teaching assistants, the dinner ladies. They are heroes.

The best countries in the world for education see teaching as an elite profession for top graduates.

Take teacher recruitment. In England we consider it a success when we fill every vacancy.

But in Finland and South Korea, there are 10 applicants for every place.

We have the best generation of teachers ever. But it can be even better.

We will have a New Deal for Teachers.

I want the number of Teach First recruits to double from 1,000 a year to 2,000 and then further still, so it becomes one of the main routes into teaching.

I want to develop ‘teacher taster’ sessions for those who want more of a feel for the job and a new National College for Teaching Excellence.

Teachers need to be rewarded appropriately so we can attract the best candidates, especially in subjects like maths, sciences and IT which are harder to recruit.

This Government wants to reduce salaries for teachers in poorer areas. How ridiculous.

Instead I want to look at ideas like helping pay back your tuition fees, if you go to teach in a poorer area. Something for something.

Teachers should be given more opportunity to collaborate and develop subject knowledge.

Funding should be more flexible, so a teacher can do a master’s degree if they want.

One way to improve teaching is to remove poor teachers. I want a teacher to have the same status as a doctor, but that means incompetent teachers must be removed.

So. A New Deal for Teachers. New rewards, and new entitlements to training.

And with the responsibility to improve year on year.

It’s heartbreaking to see the damage the Tories are doing to our education system.

It’s not enough to criticise. We have to show we will make a difference.

We’d help the teenagers whose GCSEs were downgraded.

We’d help the parents who can’t get their child into primary school.

We’d help the forgotten 50 per cent.

Live your dreams, realise your potential.

Wherever you come from, whatever your background – that is our mission. 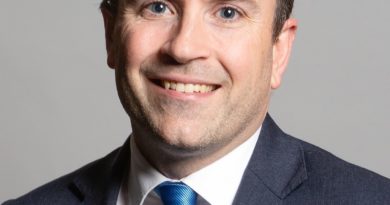 Aaron Bell – 2022 Speech on the Cost of Living Crisis