Below is the text of the speech made by Stephen Timms, the then Financial Secretary to the Treasury, to the Joint Association of British Insurers / British Venture Capital Association Conference on 29th February 2000.

Thank you for inviting me to speak, and for organising this conference, on what is an extremely important issue for our economy.

Let me just first set this in the context of the government’s wider aims.

My favourite way to explain what this Government is trying to do is that we are building a new Britain which will be modern and decent – fair and enterprising – both of those things at the same time.

The first economic priority after the election was to achieve a new stability in the UK economy after decades of boom and bust. That has been achieved in a remarkable way, so our focus now is on locking in that hard won stability, and building on it for the future. It gives us the chance to express a new optimism about the future, and so the Chancellor set out at the Pre-Budget Report in November four new ambitions for Britain in the coming decade which encapsulate what we are trying to do:

That we should be closing the gap with our competitors on productivity after years of slipping behind;

That we should have a higher proportion of the workforce in employment than in the past, and keep it like that. Actually, we already have more people in work than ever in our history, but we want to achieve the highest proportion and on a durable basis;

That for the first time over half of our school leavers should go on to study for a degree;

That we should halve the number of children living in poverty, on the way to the Prime Minister’s target of eradicating poverty altogether within 20 years.

The Chancellor this morning, speaking in my area in East London, set out more of his thinking along those lines as he prepares for the budget in three weeks time.

Institutional investors have a key role to play in making all this happen, providing the finance so that our high-growth businesses can become world-class businesses.

I want to speak briefly about the key building blocks we are putting in place, building on this new foundation of stability, to create a new culture of enterprise and entrepreneurship; where institutional investors can flourish and contribute – with private equity and in other ways – to the changes we are working to achieve.

For cartels and anti-competitive behaviour, the Office of Fair Trading will be given new investigative resources and trust-busting weapons, including the power to impose fines of up to 30 per cent of turnover.

For banking and financial services, the Financial Services Authority will now, for the first time, be required to facilitate competition – with a new scrutiny role for the competition authorities.

For the regulatory system, the government will consider how to scrutinise regulatory bodies and review existing and proposed regulations to ensure that they are promoting – not impeding – new entrants and new investment, and the joint work by BVCA, ABI and NAPF will feed into this process.

In sum, Britain is open to competition, and at the leading edge of change. And nothing should stand in the way of greater competition in every sector of every industry.

A higher degree of enterprise calls for higher levels of investment and entrepreneurship. So our second building block is the best tax environment for investors in start-ups and high tech businesses, with improved rewards from enterprise and wealth creation. On tax a great deal is being done:

On business tax, we have already cut small business tax from 23p to 20p and introduced a new starting rate of tax for small companies of 10p in the pound. Every company making profits of up to 50,000 pounds will benefit.

Corporation tax has been cut from 33 to 30 per cent. To encourage and reward new business investment, we have cut the long-term rate of capital gains tax from 40p to 10p. We have proposed a cut in the taper so that those investing for five years will pay only 10p and for three years only 22p. Final decisions – following our public consultation – will be announced in the Budget.

A new R&D tax credit will, from this April, also mean that nearly a quarter of new investment in small and medium-sized business research and development is under-written even before a penny profit is made.

The Budget will introduce a new tax incentive to promote corporate venturing too. Large companies investing in growing companies for a specified period will receive a tax relief of 20 per cent, underwriting one fifth of their investment. This 100 million pounds incentive can bring Britain additional investment of 500 million pounds every year.

We need to encourage those who already have a successful track record to play a key role in building up small high-risk companies. We recognise the significant role stock-options have to play here and we are currently looking at the role of employer NICs charges which we know is causing concern particularly in the entrepreneurial community.

We are introducing a new targeted tax cut for people with skills and talent who are prepared to move from safe, secure jobs to risk time, effort and savings to create wealth in a more challenging environment. From next year, a third approved option scheme, the Enterprise Management Incentive, will enable growing enterprises to offer their key employees tax-advantaged options over shares up to £100,000.

That measure reflects our recognition that nearly a quarter of all UK business failures are thought to be directly attributable to poor management practice. For Britain to succeed in the knowledge driven economy we need to raise our game. We want to take steps to ensure that our smaller firms can recruit and nurture the best talent, rewarding the real risk takers who are creating wealth and jobs.

Turning to private equity and venture capital – the particular interest of this conference – we want new encouragement from the venture capital industry and from institutional investors for investment in start up and early stage ventures. The problem here is not so much access to finance but finance on the right terms.

We have already the best developed venture capital market in the Europe, and we are the focal point for US investors looking for access to Europe=s growth companies.

Our venture-backed growth companies are proven job-creators. Between 1993 and 1997, employment in VC-backed companies rose by 24 per cent compared with one per cent for the economy as a whole.

BVCA’s own survey of the economic impact of venture capital showed that VC-backed companies now account for 2 million jobs in the UK, or 10 per cent of the private sector workforce.

In 1998, overseas sources provide three times as much finance for VC-backed companies as UK sources. Overseas pension funds are now the largest single source of funding for our VC-backed firms, and overseas banks are the second largest source. I was in Cambridge a few weeks ago and the venture capital specialists I met there made the point that there was a very high level of interest from elsewhere in Europe in venture investment in start up firms there.

UK pension funds invest less than one percent of their money in venture capital. In the US, the comparable figure is closer to six per cent. And in 1998, UK insurance companies represented only 3 per cent – £152 million – of money raised by the UK venture capital industry.

We cannot – neither would we want to – make UK insurance funds invest more, but I would encourage them to look very carefully at all their options and make sure they are alive to the opportunities around.

Last year, following a speech by the Prime Minister, three leading consulting actuaries and benefits consultants (Bacon and Woodrow, William M Mercer and Watson Wyatt Partners) welcomed the Government’s call for a more enterprising approach to the investment of institutional assets. They considered that the time had come for some institutional investors to put more emphasis on other opportunities, particularly unquoted securities. We will shortly be discussing with the actuaries concerned what the response has been.

To help institutional investors take the leap to invest in early-stage venture capital, we are taking forward a UK High-Technology Fund and nine Regional Venture Capital Funds to invest in early-stage high growth businesses which have historically found it difficult to raise finance. The funds will be run by experienced fund managers and will complement existing market provision, using public resources in partnership with private sector funds to address recognised gaps in the market. And all the funds will invest on a wholly commercial basis, expecting robust commercial returns.

Making Britain the knowledge capital of the world

The third building block for our enterprise Britain open to all is to make Britain the knowledge capital of the world.

Knowledge is the key to future business success. Our future competitiveness and prosperity will be directly related to our creativity, our imagination and our knowledge base. That puts a great premium on education and skills. I have visited a number of our universities in recent weeks ­ Cambridge, Oxford, Warwick, Newcastle, Durham, Sheffield ­ to have a look at what they are doing to commercialise the superb research which is being undertaken by them and I have been heartened by what I have seen.

That premium on education and skills in the modern economy is exactly why we are pushing through huge educational reform, investing an extra 19 billion pounds in education – so that everyone has the opportunity to master the skills and technologies of the new information age.

In 1997, barely one in ten schools was connected to the Internet. Now, two thirds are – the most in any G7 country. The number of primary schools connected has gone up four fold in the last year. By 2002, every school will be connected.

And this year, we are working to raise education levels amongst adults: a whole network of adult learning centres is being created; incentives are being provided to upgrade skills; and a new University for Industry which uses internet and digital TV technology will be bringing education into the home and workplace.

These reforms will help in the next stage of the technological revolution which we are determined to lead.

Our target is that within three years we want to become the world’s best environment for e-commerce. This is a huge challenge for everyone: Government needs to put in place the right framework and lead by example; individuals need to get skilled; and business needs to be confident and sufficiently ambitious to grasp the new opportunities.

There is a great deal at stake in getting all of this right. But we are optimistic.

We have started with a foundation of a new stability which we are determined to lock in. The building blocks we are putting in place now for an enterprise Britain open for all – in competition, in investment and enterprise and in the knowledge economy – those building blocks will help British investors and entrepreneurs make the most of the challenges ahead.

Thank you for the contribution you are making, and let’s work together to make this a success for all our people. 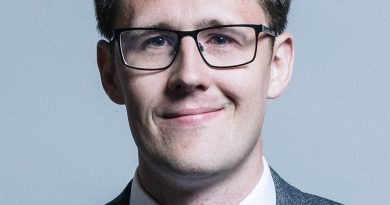 David Linden – 2022 Speech on the Resignation of Lord Geidt