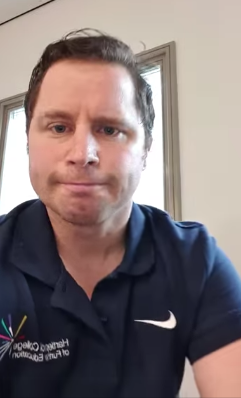 The comments made by Sean Ivey, a former marine whose house was attacked following this intervention, on anti-social behaviour, on 17 March 2021. A JustGiving page was set up after the destruction caused to Ivey’s property.

Last night, four males walked into my Mam and Dad’s house and robbed them. They were carrying weapons and threatened them both. They stole money, alcohol and very personal belongings with great sentimental value. And another thing, this was at 7.30! Half 7 at night and they just walked in!

At the weekend, I had a run in with a young male riding like a lunatic on an off-road bike in Shotton and causing damage to people’s property. The following day I saw another riding down Wingate front street, pulling wheelies and mounting the paths.

Groups of young lads have been see riding around on quads through Wingate, Station Town, Shotton, Wheatley Hill, Thornley etc, with absolutely no consideration for the public. They also caused 1000’s of pounds worth of damage to a local airfield.

A local councillor recently had his car set on fire right in front of his bedroom and so the flames burst through the window, causing damage to his house. Another elderly man was broken into, assaulted and burgled in his bungalow a couple of years ago.

Young people are congregating outside of Wingate Tandoori, hurling abuse at passers by and throwing objects at cars. Due to the abuse and damage to his car, one delivery driver for the Tandoori had to leave… this has affected his livelihood!

I was speaking to one lady who works in Wingate and lives near the point where these youngsters are congregating. She gets a lift home because she is afraid of walking past them!!! And this is not a single case!

Once upon a time, these were isolated incidents but unfortunately, they are not anymore.

Something really has to change!!! I don’t know how and I do not know what we can do but I think it’s time that the people, the good people of our communities, got together and come up with some ideas to hopefully get rid of these thugs and clean up our streets.

People are afraid of reporting incidents to the police because of the potential repercussions. Kids are being kept on much shorter leashes because parents are afraid of what may happen to them.

To that end, I am calling on the local Parish Councils to call public meetings and get a real idea of how we really feel living amongst these criminals, and then WORK TOGETHER (NOT INDIVIDUALLY!), to get them off our streets. They move and cause damage from one place to another so there has got to be something done which targets the area as a whole, not just Wingate or Horden or Wheatley Hill etc!!!

EVERYONE! It’s also time for our local council representatives to earn your wage and help us come up with some solutions. The police cannot do it alone because they don not have the man power and they need the evidence to arrest and convict.

If you’re as pissed off as I am then please write to your local councils and bombard them with orders that something must be done.

Philip Hammond – 2012 Speech to the Royal College of Defence Studies

Brandon Lewis – 2022 Statement on the Resignation of Paul Givan