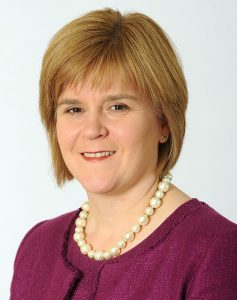 Below is the text of the speech made by Nicola Sturgeon, the Scottish First Minister, to the Scottish Parliament in Edinburgh on 27 June 2017.

But we must always remember that Scotland is one of the richest countries in the world, with resources and talent in abundance.

Our task is to make the most of our great potential and build the kind of country we want to be – a fair, prosperous, open and tolerant country.

In working towards that goal, it is my responsibility as First Minister to build as much unity and consensus as possible.

That is why, after the election – which was, of course, won by the SNP in Scotland – I said I would reflect on the outcome and, in particular, on the issue of an independence referendum.

I have done so carefully, taking time to listen to a broad spectrum of voices, both within and out with my own party.

I want to set out today where those reflections have taken me.

Before I do so, let me underline two enduring points.

Firstly, it remains my view that at the end of the Brexit process, the people of Scotland should have a choice about our future direction as a country.

Indeed, the implications of Brexit are so potentially far reaching that, as they become clearer, I think people may well demand that choice.

We face a Brexit we did not vote for, and in a form more extreme than most would have imagined just a year ago.

And now, the terms of that Brexit are being negotiated by a UK government with no clear mandate, precious little authority or credibility and no real idea, even within its own ranks, of what it is seeking to achieve.

While we must hope for the best, the reality is that with the UK government’s current approach, even a so-called good deal will be on terms substantially inferior to our current EU membership.

And, of course, there is a real risk that the UK will crash out of the EU with no deal or a very bad deal – with deep and long lasting consequences for jobs, trade, investment, living standards and the opportunities open to future generations.

On top of all of that – as we saw so clearly in the deal struck with the DUP yesterday – we now have a UK government that talks about wanting to strengthen the bonds of the UK, but in reality is so desperate to cling on to power at any cost, that it is prepared to ride roughshod over the very principles of the entire devolution settlement.

So if Scotland is not simply to be at the mercy of events, but instead in control of our own future, then the ability to choose a different direction must be available.

Secondly, there is simply no doubt that the Scottish Government has a mandate within this term of parliament to offer the people of Scotland that choice.

We have now won two elections with that explicit commitment in our manifesto – and the Scottish Parliament has also endorsed the position.

By any normal standard of democracy that mandate is beyond question.

Opposition parties – no matter how strongly they disagree with us on independence, as is their right – should stop trying to turn the basic rules of democracy on their head.

The mandate we have is beyond doubt.

But deciding exactly how to exercise it is a matter of judgment – and it is a judgment that must be made in the interests of the country as a whole.

That is what I have been thinking carefully about.

Before, during and since the election campaign, I have had hundreds of conversations with people in every part of Scotland about the issues of Brexit and a second independence referendum.

There are, of course, some people who don’t want another referendum, ever, because they oppose independence in all circumstances.

I respect that position. It is just as legitimate as the position of those who support independence in all circumstances and want another referendum tomorrow.

But many people – probably the majority – fall into neither of these categories.

Indeed, having spoken to many people who voted Yes in 2014 and to many others who did not but who would be open minded in future, what has struck me is the commonality of their views.

They worry about the uncertainty of Brexit and the lack of any clarity about what it means.

Some just want a break from the pressure of big political decisions.

They agree that our future should not be imposed on us, but feel that it is too soon right now to make a firm decision about the precise timing of a referendum.

They want greater clarity about Brexit to emerge first – and they want to be able to measure that up against clarity about the options Scotland would have for securing a different relationship with Europe.

And, in the meantime, whatever their scepticism about the likely outcome of the negotiations, they want the Scottish Government to try as hard as we possibly can to secure Scotland’s position.

Indeed, that view has even more force now that the General Election and the weakness of the UK government has re-opened the possibility, however narrow, of retaining membership of the single market.

I intend to listen to those views.

We remain committed – strongly – to the principle of giving Scotland a choice at the end of this process.

But to reassure people that they will not be asked to make this choice now – or in the immediate future – but only at the end of the process when greater clarity has emerged, I am confirming today that the Scottish Government will reset the plan I set out on March 13th.

We will not seek to introduce legislation for an independence referendum immediately.

Instead, we will – in good faith – redouble our efforts and put our shoulder to the wheel in seeking to influence the Brexit talks in a way that protects Scotland’s interests.

We will seek to build maximum support around the proposals set out in the paper that we published in December – Scotland’s Place in Europe – to keep us in the single market, with substantial new powers for this parliament, and do everything we can to influence the UK in that direction.

And at the end of this period of negotiation with the EU – likely to be around next autumn – when the terms of Brexit will be clearer, we will come back to Parliament to set out our judgment on the way forward, including our view on the precise timescale of offering people a choice over the country’s future.

In setting out this position today, I am also issuing a challenge to the other parties.

The Scottish Government will stand the best chance of positively influencing the Brexit outcome if we are at the table – with the full backing of our national Parliament – arguing for the sensible option of staying in the single market.

So join us now, with no equivocation – back the demands for the democratically elected Scottish Government to be at the table, able to influence the UK’s negotiating strategy, and for Scotland and the UK to stay in the single market.

The second conclusion I have reached is this.

Over the past few months, the focus on the when and how of a referendum has, perhaps inevitably, been at the expense of setting out the many reasons why Scotland should be independent.

The fact is we are only talking of another referendum so soon after the last one because of Brexit. And it is certainly the case that independence may well be the only way to protect Scotland from the impact of Brexit.

But the case for an independent Scotland is not just about Brexit – it goes far beyond that.

Many of us believe that independence is the right and best answer to the many, complex challenges we face as a country – and also the best way to seize and fully realise our many opportunities as a country.

So the challenge for all of us who do believe that Scotland should be independent is to get on with the hard work of making and winning that case – on all of its merits – and in a way that is relevant to the changes, challenges and opportunities we face now and in the years ahead,

That is what my party will do.

We won’t do it on our own – because the independence case is bigger than us too.

My party will engage openly and inclusively with, and work as part of, the wider independence movement.

And, together, we will build and win the case that governing ourselves is the best way to tackle the challenges we face as country – from building a better balanced and more sustainable economy, to growing our population, strengthening our democracy, and tackling deep seated problems of poverty and inequality.

My last point, today, is this.

The SNP government has been in office now for ten years.

I am incredibly proud of our achievements – delivered in the face of unprecedented Westminster cuts.

I am also clear about our priorities as we move forward – not just fighting Scotland’s corner in the Brexit talks, but also growing our economy and making sure that the public services we all rely on are there when we need them, from cradle to grave.

That means improving education, equipping our NHS for the challenges of the future, lifting people out of poverty and building a social security system with dignity at its heart.

But any government, after ten years, needs to take stock and refresh.

So over this summer, as we prepare our next Programme for Government and our budget for the year ahead, that is exactly what we will do.

We will set out afresh our vision for the country we lead, together with the creative, imaginative, bold and radical policies that, as far as possible within the current powers available to us, will help us realise that vision.

We look forward to getting on with the job in the best interests of all the people of Scotland.

Siobhan Baillie – 2020 Maiden Speech in the House of Commons