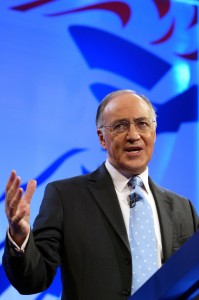 Below is the text of the maiden speech made by Michael Howard in the House of Commons on 29th June 1983.

I begin, Mr. Deputy Speaker, by echoing the remarks of my hon. Friend the Member for Bolton, West (Mr. Sackville) and of the hon. Member for Birmingham, Ladywood (Ms Short) for being permitted to make my maiden speech today. I am particularly pleased to have caught your eye at such a relatively early stage in the Parliament because it enables me to pay an early public tribute to my predecessor, Sir Albert Costain. He is a much loved man both in the constituency and, as I have discovered during the past fortnight, in this House. He is not a man who seeks the limelight but he has rendered sterling service both to his constituents and to the House. More than 22 years ago he first became a member of the Public Accounts Committee and, I believe, the length of his service since then is without equal in the history of that Committee. During a much shorter period when I was a prospective parliamentary candidate, he was unstinting in his kindness to me. That was somewhat remarkable as he had some cause to be disenchanted with those who, like me, enter the House as practising banisters. On one occasion he was waiting to catch Mr. Speaker’s eye but felt constrained to visit the room which was referred to with such affection by Mr. Speaker in his acceptance speech. Before he left the Chamber, Sir Albert entrusted his notes for safekeeping to one of his hon. and learned Friends. When he returned to the Chamber, he was somewhat dismayed to find that hon. and learned Gentleman addressing the House in a most accomplished manner with Sir Albert’s notes in his hand and Sir Albert’s words on his tongue.

My constituency of Folkestone and Hythe is a richly varied area, containing some 20 miles of coastline, Romney marsh, a most beautiful stretch of the north downs and the two towns that give it its name. Its economic activities are similarly varied. Communications to the continent of Europe are excellent and communications with the rest of England will also be excellent when the missing link of the M20 motorway between Maidstone and Ashford is completed. I am grateful to my right hon. Friend the Member for Guildford (Mr. Howell) for reinstating that project in the road programme when he was Secretary of State for Transport. His successor will hear a good deal from me about the priority to be given to it and the date on which we may expect completion.

I cannot pass from my constituency without reminding the House that it includes, in Hythe and Romney, two of the original Cinque ports which answered the summons issued by Simon de Montfort in the name of King Henry III to send representatives to what is usually regarded as our first Parliament in 1265. They have valued the closeness of their links with their Members of Parliament over the centuries since then and the loosening of those links which would be a consequence of the proposals for electoral reform presently being put about would be something I should greatly deplore. When one considers not just the proposals for electoral reform but also those for regional government espoused by the alliance parties and the sympathy with the creation of a federal European state expressed by the right hon. Member for Tweeddale, Ettrick and Lauderdale (Mr. Steel), it is not always appreciated how much the total package of alliance proposals would emasculate the powers of this House. I hope to retain for many years the trust of the people of the Folkestone and Hythe constituency who have sent me here, and I hope to continue to serve their interests in a House of Commons that has not been shorn of its powers.

I understand that there is still a view that a maiden speech should keep its distance from controversy. Although as a practising barrister of nearly 20 years’ standing I cannot pretend to be a stranger to controversy, I shall do what I can to honour that tradition in the hope that the two brief points that I wish to make will command such widespread assent that no question of controversy can arise.

In the recent election, it was widely recognised, not only by Conservatives, that strikes and industrial action contribute to the problem of unemployment. Increasing recognition of that in recent years has been reflected in the increasing reluctance of workers to take industrial action. My right hon. Friend the Chancellor referred earlier to the importance of the reform of trade union law, especially as it affects the rights of individual members of trade unions. There is one critical area — critical for the personal freedom of individual workers as well as for the link between strikes and unemployment—in which in my view the legislative support given to the individual is inadequate. I refer to the position of the worker who refuses to join a strike, who may be excluded from his trade union as a consequence and who in a closed shop may lose his job for that reason. It may surprise some of my hon. Friends to know that, despite all the legislation of the last Parliament, it is still possible for that fate to befall a worker and for that worker to be denied any of the compensation or other remedies generally available at law for a worker who is unfairly dismissed.

The Government have not been wholly insensitive to this issue. In some circumstances, set out in the code of practice on closed shop agreements and arrangements which in its revised form came into operation last month, it is likely that compensation will be payable. In my view, however, that is by no means good enough, for two reasons.

First, as a matter of basic individual freedom a worker should be entitled to know without qualification that he cannot be sacked for refusing to strike without being entitled to all the remedies for unfair dismissal provided by our law. That protection is rightly conferred on the worker who is sacked because he is or proposes to become a member of a trade union. The worker who is sacked for refusing to strike is surely entitled to the same protection.

Secondly, in the real world it is stretching credulity beyond breaking point to suppose that a worker faced with an extremely difficult decision and subject to considerable pressure will sit down and go through the code of practice line by line to determine whether the circumstances set out in it correspond with those of the strike in which he is involved. The full absurdity of the situation becomes apparent when one appreciates that the definition of the circumstances set out itself involves very difficult questions of law and a consideration of the meaning of statutory provisions recently described by Lord Diplock, sitting in a judicial capacity in another place, as most regrettably lacking in the requisite degree of clarity. That brings me to my final point, which has far wider application than the law relating to employment. When the same case was before the Court of Appeal, the Master of the Rolls made a plea to Parliament which we should do well to heed. He said: My plea is that Parliament when legislating in respect of circumstances which directly affect the ‘man or woman in the street’ or the ‘man or woman on the shop floor’ should give as high a priority to clarity and simplicity of expression as to refinements of policy. He continued: When formulating policy, Ministers, of whatever political persuasion, should at all times be asking themselves and asking parliamentary counsel ‘Is this concept too refined to be capable of expression in basic English? If so is there some way in which we can modify the policy so that it can be so expressed?’ Having to ask such questions would no doubt be frustrating for ministers and the legislature generally, but in my judgment this is part of the price which has to be paid if the rule of law is to be maintained. I do not believe that the refinement of policy which gave rise to the inclusion of some circumstances and the exclusion of others from the code of practice on the closed shop can be justified. Even if it could, I believe that the questions posed by the Master of the Rolls should have been asked. Had they been asked, I believe that the answer would have been to abandon that refinement of policy.

In the first maiden speech of this debate, my hon. Friend the Member for Derbyshire, South (Mrs. Currie) asked for greater simplicity in the law as it affects the right to buy council houses. I endorse that plea, but the area that she identified is not the only one that calls out for such treatment. For the reasons that I have given, lack of clarity in employment law can cause injustice and can damage the economy. I hope that my right hon. Friend the Secretary of State for Employment will introduce measures to alleviate that injustice in the near future and that my other right hon. Friends who bring forward legislation will pay full attention to the plea made by the Master of the Rolls. Many of us on the Conservative Back Benches intend to encourage them to do so in the months and, I hope, years ahead.