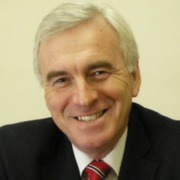 Below is the text of the speech made by John McDonnell, the Shadow Chancellor of the Exchequer, in Bournemouth on 8 July 2016.

We are meeting at a time of enormous uncertainty, following the result of the EU referendum just two weeks ago.

There is the wider political uncertainty about Britain’s role in the world.

And there is the economic uncertainty introduced by the shock of the Leave vote itself.

Longstanding trading and financial relationships are at risk of being torn up.

Perhaps the clearest message from the vote to Leave is that business as usual is no longer an option.

The shock of the Leave vote has been worsened by the shaky foundations of our economy.

Productivity growth has stalled since 2007, an unprecedented occurrence in modern peacetime history.

Partly as a result of low productivity, wage growth remains low and any inflation arising from the falling value of the pound is liable to eat into real earnings.

The current account deficit remains at near-record levels, whilst borrowing by government and households is also rising.

The economy is, if anything, more unbalanced than it was before the crash of 2008.

We argued that George Osborne’s fiscal rule, introduced last autumn, had no sound basis in economics.

The Chancellor has failed to hit his debt target at this year’s Budget.

The shock of the Leave vote, and the absence of a plan to deal with that shock, has now forced him to abandon his fiscal surplus target.

This is absolutely the right course of action, as was abandoning the threatened “Brexit Budget” of swingeing cuts and tax rises.

Further austerity would be absolutely the wrong course of action to take in an economy buffeted by a shock like Brexit.

Let me make it clear – Local Government have been bearing much of the brunt of austerity. Councils cannot and should not be the target once again.

Labour will continue to press for proper funding and resources for our local authorities.

But we need to also recognise that our economic policy now must be about more than just accepting the status quo.

We have to do more than try and patch up the damage.

The Leave vote showed just how decades of underinvestment had left too many people here feeling abandoned by what they, quite understandably, view as a distant Westminster elite.

We need a break with the old way of doing things.

I believe that it is local councils that have started to show how a new path for the economy can be created.

But it has to be matched up by action from central government.

The challenges are substantial.

Britain today has the worst regional inequality in Europe.

The gap between our richest regions and our poorest is wider even than that between North and South Italy, or between East and West Germany.

In London we see the richest places in the whole of the EU, nearly 80% of UK regions earn less than the EU average.

These are the places that tended towards voting Leave.

We should not allow a situation to persist where the majority of investment, from both public and private sectors, is concentrated in a few areas, and great swathes of the country are left behind.

It was important to see the government begin to lay out its vision of the British economy after the Leave vote.

George Osborne’s commitment, made in the Financial Times earlier this week, that he was seeking to boost the funding made available to regions in the North of England is to be welcomed.

We have asked him to set out a timetable for delivering this, and some details of the projects to be brought forward.

Local Government should be vitally important partners in designing and delivering this programme.

We’re concerned that after the Leave vote, vital EU regional funding that comes to over £10bn a year will be simply lost.

This has provided a lifeline of funding for some of the poorest regions in the country and is now at risk.

So we’ll be pressing the Government to address this question urgently. The Government must guarantee this funding is protected.

The Government’s austerity policies have reinforced the UK’s regional bias.

It is local authorities that have borne the brunt of the cuts.

But it is then the local authorities in some of the poorest places that have been hardest hit.

Overall, local authorities have seen their spending fall by 23% since 2010, allowing for inflation.

These are huge cuts for local authorities to bear.

But across the country, councils have responded with determination to their deteriorating circumstances forced on them by austerity.

Oldham council has looked to develop its own responses to the crisis, working with Oldham Credit Union to reduce the burden of problem debt locally. Its Fair Employment Charter rewards local employers and looks to use local authority procurement to improve working conditions.

And Preston, inspired by the example of Cleveland, Ohio, has developed an extensive programme of work. Preston was one of the councils facing the very sharpest cuts to its funding out of any in the country. But they are responding creatively.

They have got major local employers and buyers – so-called anchor institutions, like the University of Central Lancashire – to drive through a local programme of economic transformation. By changing their procurement policies, these anchor institutions were able to drive up spending locally.

They’re looking to shift a proportion of the joint council’s £5.5bn pension fund to focus on local businesses, keeping the money circulating in Preston.

And the council is actively seeking opportunities to create local co-operatives as a part of local business succession, working with the local Chamber of Commerce. The aim is to sustain high quality local employment, by giving the chance for workers to keep a business in local hands.

These are just a few of the ways in which imaginative local authorities are starting to show a new path for the economy.

We need to scale up and spread initiatives like these.

And we have to make devolution a reality where it has not already been achieved.

That doesn’t mean passing down responsibility for administering cuts to local and regional authorities, particularly in England.

It means ending the concentration of power and wealth in just a few hands in our capital city, and giving the powers back to those local areas and places that have been excluded for too long.

We need a government that trusts local authorities to find their own economic solutions for their own areas.

Labour already has an agreement with our new Mayors to set up a Mayoral Economic Forum, helping to bring together best practices and ideas

Looking ahead, we need to bring other local authorities on board.

I think we can develop a consensus on the approach now to be taken, based on the foundation

Most immediately, there is an urgent need for some clarity and certainty from government.

The lack of planning for the Leave vote has already been damaging to our economy.

Economic policy has been pulled together on an ad hoc basis.

The centerpiece of the Government’s macroeconomic policy, the fiscal surplus target, has been ditched.

And the Chancellor has now floated the prospect of exceptionally low Corporation Taxes as a solution to low and falling rates of business investment in the UK.

This is not a view I share. Previous cuts to corporation tax have not resulted in increasing investment, as the Office for Budget Responsibility has found.

And by whittling away at the tax base, cuts to corporation tax put more of the burden on households and small businesses, whilst increasing the pressure for cuts to local authority spending.

So we are adamantly opposed to further cuts in the headline rate of corporation tax that threaten to turn this country into little more than a tax haven.

We need, instead, some clear parameters for the ongoing discussions with the EU and other international partners about Britain’s future role in the world.

Local Government must be represented in the negotiations and decision making as we remake our relationship with Europe.

Another red line is preserving free trade. There is no economic case for reimposing tariff barriers with Europe and depriving British businesses of access to the world’s largest single market.

And we cannot accept any restrictions on the rights of those who work here.

That includes those from other EU countries who presently live and work in the UK.

We will not be willing to support any EU deal that reduces the rights available to working people in this country.

The Brexit vote should act as a wake-up call for all of us.

It will force major challenges on local and national leaders alike over the coming years.

Labour wants to work in partnership with local authorities as we begin to put together a new political economy for the country.

We will seek to ensure Local Government’s voice is heard and listened to in this challenging period ahead.