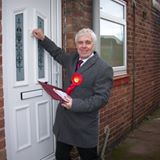 Below is the text of the maiden speech made by Harry Harpham in the House of Commons on 17 June 2015.

May I congratulate the hon. Member for Hertsmere (Oliver Dowden) and say what a pleasure it is to follow him?

As the new Member for Sheffield, Brightside and Hillsborough, I stand here with a good deal of trepidation, knowing the tireless and dedicated service that my predecessor, David Blunkett, devoted to his constituents. From both the Front and Back Benches, David fought unceasingly to improve the lives of ordinary people. David is Sheffield through and through. He was born in the constituency he would go on to represent, became a councillor at the age of 22, and led the city through the turbulent years of the 1980s. He was elected to the Commons in 1987, moved swiftly into the shadow Cabinet, and finally became a Cabinet Minister in 1997. He fought ferociously for his point of view in Cabinet, and although he may not always have got his way, as a lifelong Sheffield Wednesday supporter he was well accustomed to taking the rough with the smooth.

David carried the views of his constituents into Cabinet, and despite his heavy workload as Secretary of State for Education and Employment in Labour’s first term, and as Home Secretary dealing with the aftermath of the Oldham riots and the 9/11 terrorist atrocities in New York, he made a point of continuing to attend his constituency advice surgeries in person. He was relentless in his desire to drive up educational standards and improve the educational opportunities of all. Throughout his career, David was dedicated to the idea that for democracy to be worth the name, it should be a truly collaborative endeavour, and that politicians should reach out to the disaffected and the disfranchised. I pay tribute to the work of a man who has made an indelible mark on British politics.

Sheffield Brightside and Hillsborough covers the north-east of the city and is dominated by the low-rise housing that was originally built for those working in the steel industry centred in the nearby Don valley. These days, employment patterns are more diverse, and many of my constituents work in the retail sector and in health and social care. There is an iron age hill fort at the eastern end of the constituency on Wincobank hill. This was built by the Brigantes tribe to keep out the Roman legions, so clearly our ancestors were against further integration with Europe. Perhaps if they had had the Prime Minister renegotiate the terms, they might have thought differently.

Despite the fort, we are a diverse constituency, but we are a community that faces some stiff challenges. My constituency is ranked 19th highest in the country for the proportion of people claiming jobseeker’s allowance—6.4%, a rate well over double the national average—and the number of children living in poverty is double that found across the UK as a whole. Much of the so-called economic recovery in our area has come in the form of low-paid, zero-hours contract work, leaving families unable to budget from one week to the next. Despite the Chancellor’s crowing, far too many of my constituents are still struggling to make ends meet. There are 6,000 households in my constituency living in fuel poverty, 14% of the total in the whole of the Yorkshire and the Humber region. That is one of the issues I will take up vigorously over the coming weeks and months.

Although I welcome the Government’s commitment to full employment and the creation of more apprenticeships, this by itself is not enough. We need not just more jobs, but better jobs. Our poor productivity is holding back our economy and holding down living standards. I am deeply concerned that the Government have no clear plan for boosting output. What we need is the investment in infrastructure and a properly thought out skills agenda that will not only lead to more stable, meaningful jobs but address the pressing problem of productivity that Britain is facing. Unless Ministers act on this, not only will UK businesses fall behind their international competitors, but working people will not see the improvement in their standard of living that Government rhetoric leads them to expect.

In Sheffield, budget cuts have left the public services that so many of my constituents depend on struggling to cope. In spite of the innovative and dedicated efforts of the council, local NHS services and ordinary men and women in my constituency, people are turning to support that more and more simply is not there.

I am originally from Nottinghamshire. At 15, I left school on a Friday and started down the pit on the Monday morning. I had no qualifications to speak of. It was moving to Sheffield that gave me a second chance at education. It is the city where knowledge that everyone’s chances can be improved has been found in the past, and where I will do my best to make sure that it can be found in our future.

I got into politics because I know the good that can be done by public servants working in the interest of the communities they serve. From the Opposition green Benches, I will do what I can to protect those services from ideological attacks that would reduce them to a shadow and leave those they serve paying the price.