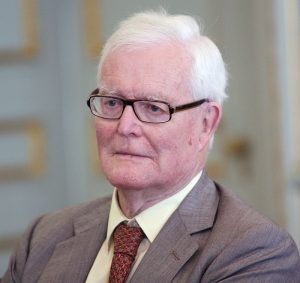 Below is the text of the speech made in the House of Commons by Douglas Hurd, the then Home Secretary, on 17 April 1989.

With permission, Mr. Speaker, I should like to make a statement about the disaster at the Sheffield Wednesday football club ground at Hillsborough on Saturday. Everyone has been horrified by this incredible tragedy in which 94 lost their lives and 174 were injured.
Shortly after the start of the match, there was a surge of spectators on the Leppings lane terrace, which crushed many at the front against the perimeter fence. This accounted for most of the deaths and injuries.

The match was due to start at 3 pm. To help ensure orderly access, the gates of the ground were opened at 12 noon. At 2.30 pm most of the Nottingham fans were in the ground, but many of the Liverpool supporters were still arriving. It was clear to the police officers in charge that there was ample capacity still to be filled in some parts of the enclosure allocated to Liverpool.

The senior police officer present considered that there was a possible danger to the lives of the spectators at the front of the crowd outside the stadium. In order to relieve the pressure, he arranged for an exit gate near the turnstiles to be opened to let a section of the crowd through. The relationship of that action to the disaster on the terrace shortly afterwards is clearly a central question to be investigated.

My right hon. Friend the Prime Minister and I yesterday visited the football ground and the two Sheffield hospitals which received casualties. I should like to pay tribute to all those involved in the rescue operations at the ground, including the many spectators who gave their help, and to those others, including the hospital staffs and voluntary agencies, who have since been working so hard treating the injured and consoling the bereaved. We heard many accounts of courage exerted on behalf of others.

I have asked for further factual reports from the police and other services, the local authority and the Football Association. Inquests will be held in due course. But over and above this, there is clearly need for a full and independent inquiry to identify the causes of the disaster and to examine what needs to be done to prevent such an accident happening again. I have therefore asked Lord Justice Taylor to carry out an inquiry with the following terms of reference: To inquire into the events at Sheffield Wednesday football ground on 15 April 1989 and to make recommendations about the needs of crowd control and safety at sports grounds. Mr. Brian Johnson, the chief constable of Lancashire, has agreed to assist the inquiry as an assessor, and arrangements will be made as necessary for other qualified assessors to be appointed and for the inquiry to be provided with technical advice and support. I am asking that the inquiry should proceed with all possible speed. Lord Justice Taylor will visit Sheffield tomorrow to begin his investigation. I am grateful to him for agreeing to undertake this task.

However, we need also to take a wider view. The Government believe that the future of football in this country lies in a national membership scheme in designated grounds and now, it seems, also in providing all-seated accommodation at major football clubs. This would involve the disappearance of terraces at those grounds. It might also involve amendments to strengthen the Football Spectators Bill so that its provision for the licensing of grounds matched this concept. We shall be considering these matters urgently.

An appeal fund is being set up by the civic authorities of Liverpool, Nottingham and Sheffield. The Government will be contributing £500,000 immediately towards this fund.

This was a devastating tragedy. Our deep sympathy goes to the families of those who died, to those recovering, and—particularly moving yesterday—to those young people who are still fighting for life and health. We owe a duty, it seems to us, to these passionate supporters of football to examine urgently and thoroughly the causes and the background, and to do all in our power to prevent such a thing from happening again. We have to set our sights high and find a better way for British football.

Jeremy Wright – 2016 Statement on the European Convention on Human Rights