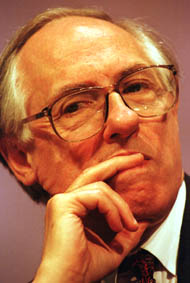 Below is the text of the speech made by Donald Dewar after winning the seat of Glasgow Anniesland in the Scottish Parliament on 6th May 1999.

I wish to thank the Returning Officer, members of his staff, stewards, police and the emergency services. I want to thank them for the long hours put in tonight, for the smoothness and efficiency of the count.

It’s been a long night, an historic night in many ways, but this important stage in our country’s story also depends on the work that these services do, and I thank them.

Counting not one but two ballots seems to me, perhaps, to be a cruel and unnatural punishment but I, of course, also recognise there is more in store tomorrow, so I do thank them for their good temper, and for their skill and expertise.

I also want to thank my opponents who fought a very – I was going to say tolerant, but they might resent that – but very civilised contest in the Anniesland seat.

But especially I want to thank my constituents in Anniesland, they have given me great support over the years, they have become friends in that period and I’m very, very grateful.

I also want to thank my election agent John Robertson and his team, and all the Labour party workers. It’s always difficult conducting a campaign, maintaining momentum, maintaining enthusiasm when the candidate inevitably is away for very lengthy periods of time in other parts of Scotland. They did it magnificently, and I must say from all accounts from all the people who have spoken to me, they did an absolutely first class job.

We are starting to see the emergence, ladies and gentleman, a picture of the new Scotland. But it would be premature for me to speculate about its final form – we will need to wait a bit longer and into the morning.

The first six words of the Scotland Act read simply: There shall be a Scottish Parliament – and with those six simple words, Scottish politics are forever changed.

I am proud that my party – and I am proud personally – to be associated with that change. Because of those six simple words voted for tonight, Scotland is a very different place.

Let’s look at this night and see it as a key point in the democratic renewal of the British constitution and its civil institutions, that began with the election of a Labour government in May 1997.

I also want to remember my friend, the late John Smith. I think he would have been very proud to see this happening now, see this Parliament elected safely tonight and he would have realised that indeed the central will of the Scottish people was being achieved.

So let all of us in Scotland begin this morning, after a time for rest and perhaps a time for calculation, and maybe even a time for counting, let us start building the new Scotland – remembering on all sides that civility is not a sign of weakness.

Let us together work for those who have placed their trust in us, the Scottish people.

This is our first democratic Parliament in Scotland for some 300 years, our people have waited for it, our people deserve it, we must give them what they want, we must struggle to deliver their legitimate ambitions, their hopes

I pledge myself to do so and I look forward immensely to the period that lies ahead. Thank you very much for your support, thank you the people of Anniesland.