Below is the text of the speech made by David Lidington, the Chancellor of the Duchy of Lancaster, on 18 July 2019.

Good afternoon, and thank you for having me here today to speak about the invaluable work the Conflict, Stability and Security Fund finances around the world.

Over the last ten years, the very nature of conflict and instability has changed dramatically. The world is facing a rise in intrastate violence, complicated by insurgencies, terrorism, serious and organised crime.

In addition to this, conflicts are lasting longer. And because they are increasingly international, these conflicts risk having an impact on the security of the UK as well.

Complex conflict requires creative solutions. So four years ago, the government decided it needed a more agile, cross-departmental approach, to complement the long term work spearheaded by DfID, the FCO and the Ministry of Defence.

Since its creation in 2015, the CSSF has enabled the government to work across departments, delivering support to fragile states at risk of instability, as well as states in the throes of complex conflicts.

Four years later, this approach is seeing strong results, as we see in the Annual Report released today.

It has contributed to halving the number of UN Peacekeeper casualties in Mali, Democratic Republic of Congo and the Central African Republic – the three most deadly UN Peacekeeping Missions.

The CSSF has encouraged 3.1 million more women to register to vote in Pakistan.

It has financed the retraining of more than 150 reformed Boko Haram soldiers giving them the vocational skills they need to establish a peaceful life.

It has contributed to saving the lives of more than 3,000 vulnerable migrants in the Aegean and the Mediterranean seas.

But these are just a few of the success stories you find turning the pages of the annual report, further demonstrating this country’s well-earned reputation as a global leader in managing conflict.

Today, the UK retains its long-held role as a trusted voice on the global stage and the only permanent member of the UN Security Council to spend both 2% of GDP on defence and 0.7% of GNI on development. So it is unsurprising that no other country has a fund as large in scope or as ambitious as the CSSF.

Its unique ability to spend both Official Development Assistance and non-ODA money means that the CSSF can be agile and responsive. It gives it the flexibility to trial new approaches, share UK expertise and leverage funding from other donors or government departments, to achieve long term change. And it builds on UK expertise in areas like policing, counter terrorism, defence and intelligence to save lives and improve security, both at home and abroad.

With a budget of £1.26bn, the CSSF brings together 13 government departments and agencies to deliver 90 programmes in no fewer than 70 different countries. Guided by the National Security Council, this allows the fund to be responsive to new and emerging threats. These are the kinds of threats which directly affect the UK’s domestic security, like the rise of hostile state actors, the increasing challenge to the Rules Based International System, growing concerns over climate change, and the rise of Serious and Organised Crime.

Serious and Organised Crime affects British citizens, more often, than any other national security threat, whether it’s online sexual exploitation or firearms offenses. And this crime comes at a cost – for the UK, at least £37 billion every year. So last year, under a new strategy, the CSSF launched a new £1.3m allocation to pay for a global network of advisers on serious and organised crime.

This is an important area for both UK and global stability and security. For example, when presented with the name, the “Conflict, Stability and Security Fund,” one might not think of cracking down on illegal cigarettes. But cigarette smuggling in the Western Balkans has a direct impact upon the UK.

It costs the UK economy £2.5 billion every year in lost tax revenues. But it also helps to perpetuate the abhorrent practice of people trafficking and illegal drug smuggling across Europe, providing income for serious and organised crime networks.

And today, the UK’s National Crime Agency is working with the Kenyan authorities to crack down on international trafficking in the region and the sexual abuse of children. Since 2017/18, the Unit has rescued more than 90 survivors of these crimes.

CSSF programmes are also supporting our broader global policy objectives. With ongoing Russian aggression at its borders, Ukraine remains vulnerable to attack. A strong and stable Ukraine has long been a top UK priority, and through the CSSF we are able to coordinate our diplomatic, humanitarian and defence and security efforts for a more holistic approach.

For example, by educating school children and communities and clearing 1 million square metres of land, we have helped halve landmine casualties from 2017-2018.

This comprehensive approach can be beneficial for the UK, too. We have provided military support and training to over 13,000 members of the Ukrainian Armed Forces in infantry skills, medical, operational planning and logistics – which in turn provides the UK with in-depth, on-the-ground insight into the challenges of defending against Russian aggression.

And we are even using CSSF to act on this government’s commitment to combat climate change. In Columbia, the CSSF has helped maintain and implement the peace process since 2016.

But peace – however longed-for – can sometimes have unintended results. An unfortunate effect in Colombia has been an increase in the rate of deforestation, as communities recover from conflict and former fighters return home to find limited economic opportunities. So we are working with the Government of Colombia to bring former fighters together with local communities to design jobs like eco-tourism and farming that offer alternatives, not only to violence, but to activities that damage the environment to protect Columbia’s natural resources.

Its clear CSSF programmes are making a real difference in the lives and communities of those affected most by violence and instability. But it’s also demonstrated an ability to adapt as the nature of conflict continues to evolve.

Now there are areas for improvement and change. By seriously considering external recommendations, like those from the Independent Commission of Aid Impact, the CSSF has significantly improved its programme management, transparency and monitoring and evaluation practices. And I was pleased to see in the ICAI follow up report published today an acknowledgment of these improvements.

This progress should be applauded. As government comes to the end of this Spending Review period, the CSSF will need to ensure that it can continue to learn and adapt. And we will need to be clear about how a fund of this size and structure can be used most effectively.

So as we celebrate the successes of this ambitious fund, with many of those who made them possible, I look forward to seeing what comes next.

Because in a world of competing conflicts and challenges, the UK’s investment in global security, and its willingness to trial new approaches and respond to emerging threats, speaks volumes.

It emphasizes that our leadership in this area is a responsibility we do not take lightly, whether that is financially or politically.

And it sets the standard for countries everywhere as we work together to create a more peaceful and a more prosperous world. 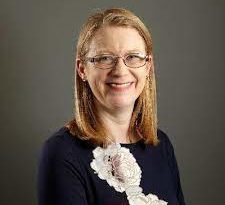