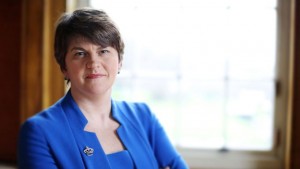 Below is the text of the speech made by Arlene Foster in the Northern Ireland Assembly after she became First Minister. The speech was made on 11 January 2016.

Mr Speaker, it was with great humility, an enormous sense of responsibility and the imagination of endless potential for Northern Ireland that I affirmed the pledge of office and take up this post today.

I can think of no greater honour than to have the opportunity to serve my country and the people of Northern Ireland as their First Minister.

I am truly humbled by the trust and confidence which has been placed in me and grateful for all those who have kept me in their prayers in recent days.

As a young girl growing up in rural Fermanagh, the most westerly constituency in the whole of the United Kingdom, in the days when we were plagued by terrorism and decisions affecting our fates and our futures were taken far away, I could not have dreamt that I would be in this position today.

Is it any wonder that in politics I believe that nothing is impossible.

But the real measure of success is not in obtaining the office but in how it enables me to help others realise their dreams, ambitions and aspirations.

For so many reasons, this is an historic moment.

I take great pride in the fact that since Northern Ireland was created almost a century ago I am the first woman to hold such a post.

It was with even greater trepidation still that I learned I am also the youngest person to have assumed this post.

I hope that I can bring the perspectives that both these attributes have to the office.

Indeed, at this turning point in our country’s history, as we seek to address the challenges of the future, I believe the moment is right for the next generation to assume leadership.

The challenges that this generation face are very different to those that our forefathers did a century ago, but our fundamental values remain the same.

The challenges in just five years time will be different again.

Though I may be the youngest holder of this post I am not new to Ministerial office.

Mr Speaker, you will be aware that this is not the first time that I have taken this Pledge of Office but over the past eight years have done so as the Environment Minister, the Economy Minister and most recently as the Finance Minister.

I have learned much in all these roles that I will bring to my new office.

I will be forever grateful for the opportunity that both Dr Paisley and Peter Robinson gave me to serve the community in Ministerial office and the rich legacy that I am inheriting in this office.

That experience has prepared me for the challenges that will undoubtedly lie ahead.

Last autumn we published the Fresh Start Agreement; and today we make a new start with our eyes focussed firmly on the future.

But in looking to the future we will never forget the past.

I am conscious of those who have not lived to see this day.

Of course, I think particularly of my father who would have been so proud of what has been achieved.

I also think of all of those who served the community in the security forces during the dark days of the Troubles and those whose lives were cut all too short.

I make this promise: In all I do I will honour their memory.

We are all shaped by our history and our experience.

Many of us live with the scars, emotional and real that we have endured.

Far too often during my earlier years I saw the devastating effect that terrorism and violence had on our community.

We cannot allow the past to forever blight our future.

That’s why I want to make sure that we never ever go back to the bad old days.

I believe that the duty on me to make Northern Ireland work is all the greater for the sacrifice that they have made.

The reward and legacy of those who gave their lives defending the Country is a stable and secure Northern Ireland within the United Kingdom.

I also pay tribute to those who have served our community so well in positions of leadership over the last decades.

It is because of what they have done that we have the hope for the future that we do.

They have laid the foundations for the new Northern Ireland that we are seeking to build.

But at this moment in our country’s history it is time for a new generation to step forward.

To build on all that has been achieved and to move our country forward.

Abraham Lincoln once said, “The best way to predict your future is to create it.”

That is our responsibility now… to create a better future than the past and one where we can live together in a society free of strife and conflict.

The challenges of our time are great, but they are different than in the past.

The challenges of our time are great, but the opportunities for the next generation are greater still.

The challenges of our time are great, but there are none that we cannot overcome.

With Northern Ireland’s position in the United Kingdom secure, with devolution safeguarded, and with the economy growing again, we can have hope for the future.

Over the years people from this small corner of the world have done remarkable things.

We can do that again.

In my role as the economy Minister for seven years I travelled the world seeking to bring jobs and investment home.

In that time I am proud that we created more jobs from international investment than at any time in our past.

One thing made that easy. It was the quality of our young people.

When I travel across Northern Ireland I see people with abundant gifts and talents … sometimes held back by nothing but a lack of confidence and a poverty of ambition.

The only thing that they lack is belief.

I want to use this office to restore that belief and to give new hope.

I want to instil a new confidence in our people and a pride in our Province.

I want everyone to love this country with the same passion that I do.

Leadership has many facets and many responsibilities but there is no greater challenge than to motivate and to encourage and to inspire.
I want to bring hope to those who lack it and help to those who need it.

I want us to live in a more harmonious society where we seek accommodation with one another and not conflict.

Those in positions of responsibility in Government cannot do everything but we can act as an example to others.

If only we believe in ourselves all things are possible.

Mr Speaker, I make no apology for being a unionist but my role as First Minister calls on me to serve the whole community.

I see that not just as a legal duty but a moral imperative.

I want the same opportunities for every child in Northern Ireland as for my own.

I want no section or part of the community in Northern Ireland to be isolated, marginalised or left behind whatever their background or way of life. That was Edward Carson’s vision of the Union and it is mine too.

The best way to safeguard our history and culture and traditions is to make sure that we create a society in which everyone can have a say and play a part.

That is why it is no coincidence that support for our constitutional position has never been stronger.

I want to do all of that not in spite of my own past but because of it.

I will work with anyone who can share that ambition of hope and will oppose anyone who would deny our people the future that they deserve.

The people we represent deserve no less.

I’m tired of Stormont being a watchword for arguing and bickering. That’s not why our people elected us. They did so to provide a better future for us all.

I will do all I can to change the political culture of this place but I can’t change that alone. We can only do it by working together.

I know from experience it won’t be easy. Real change never is.
But I ask today that we find a new way of doing business, one that places a greater premium on consensus than on conflict.

Mr Speaker, it is with great honour that today I accept the nomination to become First Minister.

It is truly humbling that the girl who was raised and reared in Fermanagh has been given the opportunity to lead the country and the people she loves so much.

Today is a new chapter in Northern Ireland’s story but when the history of this time comes to be written let it be said of all of us that we fought the good fight, we finished the race and we have kept the faith.