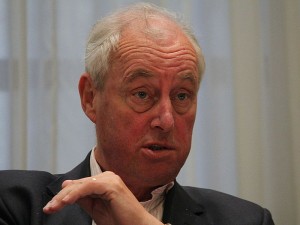 Below is the text of the maiden speech made by Tim Yeo in the House of Commons on 5th July 1983.

I am grateful to you, Mr. Speaker, for calling me to make my maiden speech on a subject which affects far more people than the obscure title of the order suggests and which has become controversial.

I declare an interest as the director of the Spastics Society which is one of the charities that derives substantial revenue from a football pool that is operated under the Pool Competition Act 1971. I hope to remain employed by the society until the end of this year and thereafter to serve it in a voluntary role.

Suffolk, South is an area of sharp contrasts. The other one third, which was part of the old Bury St. Edmunds constituency, contains Haverhill, a town with a substantial GLC overspill population, and many rural villages. It is a reflection on the excellent work of my hon. Friend the Member for Bury St. Edmunds (Mr. Griffiths), who supported me generously before and during the general election campaign with time and advice, that he is spoken of as highly on the GLC estates in Haverhill—where there is now a rapidly growing element of owner-occupation — as in the villages by people who are Suffolk born and bred.

The Pool Competitions Act is an important measure for several of the leading charities. The Spastics Society, the Imperial Cancer Research Fund, the National Fund for Research into Crippling Diseases, better known as Action Research for the Crippled Child, are the best known, and each derives substantial revenue from the pools that operate under the Act.

Over the past 25 years, the Spastics Society has received almost £40 million from that source, making it the most important single source of revenue. Those who decry the operation of the football pools ignore the tremendous benefit that has been conferred not just on the charitable organisations, but on the thousands of families who have reason to be profoundly grateful for the income received by charities from the operation of the Spastics Society, football pool and other charity pools.

The relative importance of the pools has declined. The Spastics Society football pools contributed 44 per cent. of total voluntary income in 1973–74 whereas the figure for 1982–83 was down to 6 per cent. However, £500,000 still comes to the society from the football pool. That is three times the amount received by direct grant from central Government.

The society paid £483,000 last year in unrecoverable VAT. I hope that my right hon. Friend the Minister of State will have the opportunity to remind his Treasury colleagues about the burden that VAT imposes on charities. The sum of £500,000 is a substantial one in charity terms. It is enough to pay for the whole of the Spastics Society’s social work service of 30 specialist workers assisting families in England and Wales. It is sufficient to cover, in running 33 centres for spastic adults, the difference between the cost and the fees received from local authorities. The money from the football pool is financing worthy activities.

Apart from the income that the charities receive, there is another aspect of the football pools that has so far been overlooked this evening. They provide a means for 1.5 million people every year to make a small contribution to charity while at the same time enjoying, quite legitimately, a modest flutter with the possibility of sizeable, although not sensational, financial gain. Although it may be held that gambling is in one sense an undesirable activity, I do not believe that the participants in such football pools, by staking perhaps 15p or 20p a week, are endangering their family budget. The operation of the pools may mean that among the 1.5 million weekly subscribers are some who would not otherwise be aware of the charities that they are supporting and the work that those organisations are doing.

There has been a general recognition for a number of years that the existing position, requiring the renewal of the order every year, is unsatisfactory not only for the Government and the House but for the operators of the pools who cannot make any long-term plans, and for the charities who are uncertain about the security of the income. Therefore, I welcome without reservation the statement by my right hon. Friend that the Act will be renewed annually throughout the life of the present Parliament. As we all know, this will run for a full five years. The Government have given the pool operators and the charities a longer period of secure operation than at any time since the original passage of the Pool Competitions Act 1971. For that reason I know that the charities will be grateful to my right hon. Friend for his assurance.

My right hon. Friend will also know that extensive consultations have been held over the past few years with the Home Office, and the charity pool operators, and the charities were fully involved in those consultations. The charities and pool operators made clear their preference for new legislation that would permit the continued operation of charity pools on a permanent basis. If that is not possible, I hope that my right hon. Friend will hold discussions with all the parties involved to ensure that any damage to the charities’ incomes, following the ending of the present basis of pool operation, will be minimised.

Bringing the present charity pools within the scope of the 1976 Act would be difficult to achieve without some adverse impact, but if it cannot be done. I hope that my right hon. Friend will argue even more strongly with his Treasury colleagues about value added tax.

The Pool Competitions Act enshrines what seems to be an anomalous position, because it restricts the charity pools to a small number of specified operators. I stress that that restriction has been the wish of successive Governments since 1971. The charities concerned have no desire to be part of an exclusive group. At all times, the charities and pool operators have been at pains to stress that they would be happy for the Act to be amended to allow other charities to compete on an equal basis.

When the matter was discussed in the past—the point was raised again this evening—concern was expressed about the expenses of pool operators. I stress, for the benefit of those who do not understand the nature of these pools, that the pool operators are commercial companies which are separate from the charities. The Spastics Society, for example, exercises no management control over the Spastics Society football pool, and has no legal responsibility for its administration.

To some extent, I share the concern about the expense ratios. However, the circumstances of the pools have to be borne in mind, in particular the proportionate cost of running a football pool with a small weekly stake. It is 16p in the case of the Spastics Society football pool. The cost of running such a pool will inevitably be much higher than the cost of running a pool that has a weekly stake of, say, £1. Moreover, all subscribers should be aware how much of their stake — in the case of the Spastics Society football pool, it is 15 per cent. — goes to the charity, how much goes to the prize fund, and how much to expenses. Pool subscribers will also be aware that after the charitable donation has been deducted from their weekly stake, one third of what remains goes to the Customs and Excise in betting duty.

The hon. Member for Huddersfield (Mr. Sheerman) may have talked to a number of leading fund raisers during the past week, but he has not attempted to talk to me, or to my colleagues who are involved in fund raising, and whom I see in the Gallery. As I run one of the largest fundraising operations in the country, raising about £10 million a year from voluntary sources, it is a shame that the hon. Gentleman made no attempt to talk to me if there is as much concern about fund-raising methods and costs as there seems to be. We in the Spastics Society are perfectly happy with the present system of pool operations.

I hope we shall find a way forward that does not damage the financial position of the charities over the longer term. The voluntary sector plays a major part in the life of our country, and unusually, it enjoys the support, both practical and philosophical, of most, if not all, sections of the community. The true size of voluntary organisations is not known precisely, although the Charities Aid Foundation is sponsoring research, the results of which will be available later. It is likely to show that in economic and financial terms the voluntary sector is a force to be reckoned with.

The Government have expressed their enthusiasm for the voluntary sector on many occasions and have backed their words with deeds such as increasing direct Government grants and fiscal concessions in the form of covenants, legacies and relief from stamp duty. That has demonstrated tangibly the Government’s remarkable support for the activities of many leading charities. Bearing in mind that every pound of direct Government support is boosted by voluntary donations and that in addition to expenditure by voluntary charities considerable real value is obtained through the work of unpaid volunteers, there is a substantial multiplier effect at work, converting each pound of Government assistance into several pounds’ worth of activity.

By giving his assurance, my right hon. Friend the Minister has given some short and medium-term help to the charities. But the long-term anxiety is perhaps now more pronounced. It is in the interests of the community for the House to approve legislation that allows some modest form of gambling to be promoted for the benefit of charity. By doing so, the voluntary sector, which we are all so anxious to encourage, would receive continuing benefits.