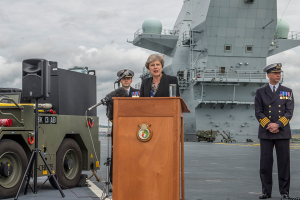 Below is the text of the speech made by Theresa May, the Prime Minister, on board HMS Queen Elizabeth in Portsmouth on 16 August 2017.

It is a great pleasure to be here with you aboard HMS Queen Elizabeth today. Let me start by thanking you all, a great partnership of ship’s company and contractors, for your tremendous work putting this great ship through her paces during her sea trials. I know it’s been a major undertaking.

This is the biggest and most complex warship ever built for the Royal Navy. So to test her capabilities thoroughly, and to make sure that her 17 million components are working as they should, is a very big job. The fact that she was ready to come in to port ahead of schedule is testament to your hard work.

As the first generation of sailors to form this ship’s company, you have a special privilege and responsibility. You are setting the standard for those who come after you. Decades from now, when this ship is carrying our flag around the world, protecting our interests and ensuring our security, you will be able to look back on this time with pride. And the whole country is proud of you. The skill and professionalism of the Royal Navy are world-renowned. Your service is critical to our country’s security and success in the world. In doing your vital work, you and your families are often called upon to make enormous sacrifices.

I know that you make them unstintingly and that you always give of your best. Britain truly has the best sailors, marines and officers in the world and I believe that you deserve the very best equipment. That is what we have with HMS Queen Elizabeth. This ship is a symbol of the United Kingdom as a great global, maritime nation.

Clearly, she is a stunning piece of twenty-first century engineering and a true testament to British shipbuilding and design. Six shipyards from across the United Kingdom contributed sections of this vessel. In Glasgow, Devon, Tyneside, Merseyside, Portsmouth and Fife, the skill of British shipbuilders were on display in her construction. Over 10,000 people, including 800 apprenticeships, 700 businesses helped build the mighty ship we see today. We are determined to build on the success of the Queen Elizabeth class carriers with a National Shipbuilding Strategy to open up new opportunities for our great British shipyards in the future.

Britain can be proud of this ship, and what it represents. It sends a clear signal that as Britain forges a new, positive, confident role for ourselves on the world stage in the years ahead, we are determined to remain a fully engaged global power, working closely with our friends and allies around the world.

As a leading member of NATO, the foremost military power in Europe and a permanent member of the UN Security Council, Britain has an enduring responsibility to help sustain the international rules-based order, and to defend the liberal values which underpin it.

To ensure we can do so effectively, we will increase defence spending every year and continue to meet NATO’s target to spend 2% of GDP on defence. Our carrier programme is an example of what that spending can deliver. As highly versatile and potent assets, they will be able to meet the widest range of challenges around the world. Whether the task be high intensity war fighting, targeted action to fight terrorism or humanitarian relief to save lives overseas, these ships will transform the UK’s ability to project power around the world.

Alongside her supporting task-group, including state-of-the-art aircraft, helicopters and escorts, HMS Queen Elizabeth and HMS Prince of Wales will in time give the UK a truly world class carrier strike capability for decades to come. Here in Portsmouth, the home of the Royal Navy and the new home of this great ship, we are surrounded by reminders of the Royal Navy’s proud past. It was from this harbour that Nelson embarked aboard HMS Victory before the battle of Trafalgar; from here the allied forces left for the Normandy beaches to defeat fascism on D-day; and from here that the task-force set sail for the South Atlantic to liberate the Falklands.

Many times in our history we have called upon the Royal Navy to defend our island and protect our interests and those of our citizens around the world. The threats we face may have changed, and naval technology advanced beyond all recognition. But in the fifty years of service to come from this vessel, we can be inspired by those traditions to face the new challenges of the twenty-first century with the same determination and resolve which have always been the Royal Navy’s hallmarks.

I hope that you can all enjoy some respite before you take the ship out of harbour again for the next phase of her sea trials, and let me once again thank you all for your service to our country.