Below is the text of the speech made by Theresa May, the Prime Minister, in the House of Commons on 23 October 2017.

With permission, Mr Speaker, I would like to make a Statement on last week’s European Council.

Long after we have left the European Union, the UK will continue to be a strong and committed partner, standing alongside our neighbours and working together to advance our shared values and interests.

This Council provided a further opportunity to demonstrate that ongoing commitment, through discussions that included migration, the digital single market, North Korea and Iran.

And it made important progress in moving towards the new, deep and special partnership with the European Union that we want to see.

First on migration, the UK is playing its full part.

The Royal Navy has intercepted 172 smuggling boats and saved over 12,000 lives since Operation Sophia began.

While our National Crime Agency is working with Libyan law enforcement, enhancing their capability to tackle the people smuggling and trafficking networks.

At the Council we welcomed the reduction in migrant crossings and the renewed momentum behind the Libyan political process.

But we must also continue to address the root causes driving people across the Sahara and the Mediterranean.

So the UK is also continuing to invest for the long term in education, jobs and services both in countries of origin and transit.

On the digital single market, it is right to keep up the pressure on completing its implementation by the end of 2018.

This will bring new opportunities to British businesses and consumers, contributing to growth and jobs.

At this Council, I also argued that the free flow of data is key to unlocking the potential of Europe’s digital trade and we secured conclusions which recognised this.

As the Government set out in a paper over the summer, such arrangements will be an important part of the future relationship between the UK and the EU.

On North Korea, we welcomed the EU sanctions adopted last week and reaffirmed our clear condemnation of North Korea’s aggressive and illegal missile and nuclear tests.

We urged all states, including China, to play their part in changing the course Pyongyang is taking.

And on Iran, the Council built on the joint statement made by Chancellor Merkel, President Macron and myself last week, reiterating its firm commitment to the nuclear deal.

This was the culmination of 13 years of diplomacy and a major step towards ensuring that Iran’s nuclear programme is not diverted for military purposes. That is vitally important for our shared security.

Exit from the EU

Mr Speaker, turning to our negotiations to leave the European Union, I shared the vision I had set out in Florence for a creative and pragmatic approach to a new, deep and special partnership between the United Kingdom and the European Union.

A partnership based on the fundamental beliefs we share – in democracy and the rule of law, but also in free trade, rigorous and fair competition, strong consumer rights, and high regulatory standards.

Both sides have approached these talks with professionalism and a constructive spirit – and we should recognise what has been achieved to date.

This has been my first priority from the very beginning of the negotiations – and it remains so.

The negotiations are complicated and deeply technical but in the end they are about people – and I am determined that we will put people first.

EU citizens make an extraordinary contribution to our national life, enriching the economic, social and cultural fabric of our country – and we want them to stay.

I know that EU Member States also value the UK nationals living in their communities and I want them to have their rights protected too.

We are united on the key principles, and while there are a small number of issues that remain outstanding, we are in touching distance of a deal.

This agreement will provide certainty about residence, healthcare, pensions and other benefits.

It will enable families who have built their lives together to stay together.

We will also ensure that the implementation of the agreement we reach does not create complicated and bureaucratic hurdles.

So we are developing a streamlined digital process for those applying for settled status in the UK in the future.

This will cost no more than a UK passport. People applying will not have to account for every trip they have taken in and out of the UK and they will no longer have to demonstrate Comprehensive Sickness Insurance.

And there will be a simple process for any EU citizen who holds permanent residence under the old scheme to swap their current status for UK settled status.

To support this, we are setting up a User Group that will include representatives of EU citizens in the UK as well as digital, technical and legal experts.

And we will do everything possible to work closely with EU Member States to ensure their processes are equally streamlined for British nationals living in their countries.

We have also made significant progress on Northern Ireland, where it is absolutely imperative that joint work on the peace process is not affected in any way.

The Belfast agreement must be at the heart of our approach and we have clearly agreed that the unique circumstances across the whole of the island of Ireland will require specific solutions.

There will not be any physical infrastructure at the border and we have also developed joint principles to ensure the continuation of the Common Travel Area.

These principles will fully preserve the rights of UK and Irish nationals to live, work and study across these islands – and protect the associated rights to public services and social security.

No UK or Irish national will need to apply for settled status anywhere in the Common Travel Area at any stage in order to protect their entitlements.

And to provide legal certainty, the joint principles we have developed recognise that the Withdrawal Agreement should formally acknowledge that the UK and Ireland will continue to be able to uphold and develop these bi-lateral arrangements.

Mr Speaker, this Council provided an opportunity to assess and reflect on how to make further progress in the negotiations.

My speech in Florence made two important steps which have added a new impetus.

First, I gave two firm commitments on the financial settlement: that the UK will honour commitments we have made during the period of our membership and that none of our EU partners should fear they will need to pay more or receive less over the remainder of the current budget plan as a result of our decision to leave.

As the House would expect, we are going through our potential commitments line by line and that detailed work continues.

And second, I proposed a time-limited implementation period based on current terms, which is in the interest of both the UK and the EU.

At this Council the 27 Member States responded by agreeing to start their preparations for moving negotiations onto trade and the future relationship we want to see.

The Council conclusions call for work to continue with a view to – and I quote – “consolidating the convergence achieved and pursuing negotiations in order to be able to move to the second phase of the negotiations as soon as possible.”

And President Tusk, in his press conference ,was clear that the EU’s internal work “will take account of proposals” presented in the Florence speech.

And indeed that this agreement to start preparatory discussions would not be possible without the new momentum given by that speech.

So Mr Speaker, I am ambitious and positive about Britain’s future and these negotiations.

If we are going to take a step forward together it must be on the basis of joint effort and endeavour between the UK and the EU.

But I believe that by approaching these negotiations in a constructive way – in a spirit of friendship and co-operation – we can and will deliver the best possible outcome that works for all our people.

As Chancellor Merkel said: “We haven’t reached a final agreement, but it’s going to happen.”

We are going to leave the European Union in March 2019, delivering on the democratic will of the British people.

But while we must and will prepare for every eventuality, I am confident that we will do so in a smooth and orderly way and that we will be able to negotiate a new, deep and special partnership between a sovereign United Kingdom and our friends in the European Union.

That is my mission.

That is this Government’s mission. 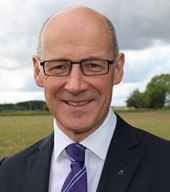