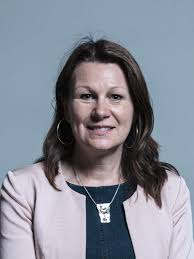 Below is the text of the speech made by Sue Hayman, the Shadow Environment Secretary, at the Labour Party conference held on 24 September 2019.

Last week we witnessed an extraordinary global event. Millions of young people took to the streets across the world to demand more action in the fight against climate change. I’m sure many of you, like me, joined them to show your support.

Millions of young people. Inspired to make a difference by a Swedish teenager. So let us applaud Greta Thunberg!

On March 26 this year I stood up in Parliament and called on this Tory Government to declare an Environment and Climate Emergency. They refused. They said they are doing enough. They are not.

On May Day, Jeremy Corbyn and I went back to Parliament. We declared a Climate Emergency, anyway. It is Labour that is leading the way. Last year we published Labour’s plans for a Green Transformation. We set out how we would decarbonise our economy. We have built on those plans.

Earlier today you heard it. Our plans for a Green Industrial Revolution.

And in these debates we have heard more of your ideas and aims. But I have been working on another revolution. A revolution in food and farming. It is an essential part of our effort to combat climate change.

Agriculture contributes nearly six million tonnes of carbon dioxide to our carbon footprint. A much higher proportion of other greenhouse gases, like methane and nitrous oxides. Land use offsets some of these emissions but our chosen diets, our food packaging and food wastage contributes more again.

Food waste. A symptom of a billion dollar industry astride a broken system. A system which leads to food banks. Do you remember what Boris Johnson said about food banks? He said, “When I was running London, I set up loads of food banks. They are fantastic things.”

Food banks, Mr Johnson, are not ‘fantastic’. Food banks are the result of Tory austerity. They are the product of poverty, of food insecurity. They are the failure of Tory changes to the benefits system. They are late welfare payments. They are privatised work assessments. They are a punitive, heartless sanctions regime. How else is it, in 21st century Britain, in one of the richest countries in the world, more than one million emergency food supplies are handed out each year.

How, in Britain, can there be children scavenging in school bins for apple cores because there is no food at home? How can people with malnutrition be taking 200,000 hospital bed days each year? Hospital admissions for malnutrition have trebled under the Tories and their Lib Dem coalition partners.

It’s you, Prime Minister. Tories did away with child poverty targets. Tories won’t monitor hunger. And you have no strategy for food security. Just a taste for chlorinated chicken. Healthy food is not a luxury. It is a basic human right.

Today , I am announcing that the next Labour government will introduce a Right to Food, embedded in UK law, underpinned by an over-arching national food strategy. We will introduce a Fair Food Act. We will ensure that everyone has access to nutritious and sustainable food.

That means that everyone is able to feed themselves. Sufficient income. Reduced living costs. Social welfare. A real Living Wage. No more bedroom tax. An uprated carers’ allowance. And an end to punitive benefit sanctions.

What kind of barbaric society punishes someone for missing an appointment by making their children go hungry? Our measures mean that Labour will halve food bank usage within our first year in Government. And we aim to end the need for food banks completely within three years.

Labour will set up a National Food Commission to uphold the Right to Food. We will set up a £6m People’s Access to Food Fund in the 50 most insecure food areas in the country.

Conference, we will back British farmers and food producers to produce sustainable, quality foods. We will not allow a no-deal Brexit to flood the UK with imported food produced to lower environmental, social or animal welfare standards.

Labour will not agree free trade deals or EU arrangements that threatens our existing food standards. We will stand up for our nation’s food security. Our nutrition. Our environment, Our public health. And our farmers, the bedrock of our rural communities.

That’s a quarter of all food purchased in a year, at a cost of over £20 billion. And it is equivalent to more than 20 million tonnes of greenhouse gas emissions. We cannot tackle climate change unless we sort out our food systems. A Labour government will commit to net zero emissions from farming and land use. The scope for carbon storage on agricultural land is huge. I’m already working with the National Farmers Union and sustainability organisations to make that happen.

And I have also put animal welfare rights at the heart of Labour’s approach. Recently I published Labour’s animal welfare manifesto, a 50-point plan. The most comprehensive approach yet to promoting animal welfare standards and animal rights. It covers the way we treat farm animals as well as wild and domestic animals. It’s on the Labour Party website but you can also pick up a copy here.

But conference, let me leave you with this. When someone tells you that all political parties are the same, you tell them this.