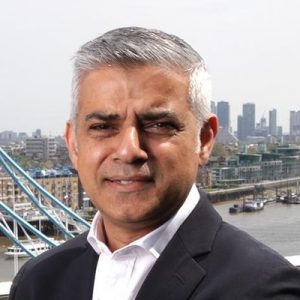 Below is the text of the speech made by Sadiq Khan, the Labour Mayor of London, at the Labour Party Conference held in Brighton on 25 September 2017.

Conference, it’s great to be back in Labour Brighton. And it’s great to see our Labour Party so fired up under Jeremy Corbyn. Labour confounded all expectations at the general election this year.

Let’s be clear, Theresa May called this snap election to try and wipe us out. And boy did she fail.

We made huge progress in the general election and the credit for that goes to one person – the leader of our party – Jeremy Corbyn.

He mobilised our movement. He motivated our activists and reached voters we hadn’t reached before. Thanks to the hard work of Labour members and trade unionists, London elected four fantastic new Labour MPs.

And by the way – hasn’t Emma been an amazing advocate for the neglected residents affected by the terrible Grenfell fire?

As a united Labour family we’re on the march. This year’s election came during an unbelievably difficult time for London, our capital,the city I love so much. It’s been one of the darkest times in London’s recent history. We’ve been through too much suffering, too much horror, and too much loss. The terrorist attack on Westminster – the heart of our democracy. The attack on innocent people, enjoying a night out in London Bridge and Borough Market. The horrific fire at Grenfell Tower. The attack on innocent people near Finsbury Park Mosque during Ramadan. And the attack at Parsons Green station on Londoners, as they travelled into work and school.

Nobody expects such tragedy. And no one should tolerate it. We prepare and practice for the worst, but we hope and pray it will never happen. Keeping Londoners safe is my top priority. And in all honesty, it’s hard – by far the hardest part of my job. It really does keep me awake at night.

Fearing the call in the early hours that came too often this summer, to say the worst had happened. More innocent Londoners, who have experienced unimaginable horrors to help and console. More funerals to attend of those who have been killed. And always, always more to do to keep Londoners safe.

But Conference – there are some people who spend their entire lives trying to stop these terrible events and who lead our response when they happen. Whose job it is to put themselves in harm’s way, every day, to try to keep the rest of us safe. And who do it with dedication, professionalism and heroism.

Conference, please stand and join me to show your appreciation to our amazing emergency services. Thanks to our police officers, community support officers and staff. Thanks to our firefighters and control room operators. Thanks to our frontline NHS staff, and all who support them – our paramedics, nurses, doctors and health workers. And thanks to our transport staff who are so often on the front line.

On behalf of all Londoners – and the entire Labour Party – thank you for everything you do. You truly are heroes.

In the darkness of this year the bravery of our emergency services has been a beacon of hope. We have witnessed incredible courage and self-sacrifice. Like PC Keith Palmer, who was tragically killed in the line of duty while protecting Parliament. Although he was unarmed, he didn’t hesitate before confronting the attacker. Rarely has a St George’s medal for bravery been so deserved. And our thoughts and prayers will always remain with his family and friends.

Or take Colleen Anderson, a junior doctor at St Thomas’ Hospital. When she saw the attack from the hospital window, she rushed across the river to treat people lying injured in the road.

Or Wayne Marques, the British Transport Police officer who, single-handedly, took on three armed attackers at London Bridge. Despite suffering terrible wounds, he fought them off until help arrived.

Or the hundreds of firefighters, who went far above the call of duty to save lives during the fire at Grenfell Tower. Who took extraordinary risks with their own safety.

And I want to say a special thank you to Dany Cotton – our London Fire Commissioner. Dany led the rescue operation at Grenfell Tower – going into the building and taking those risks alongside our firefighters. I want to thank Dany also for the honesty with which she talked about those awful scenes – and for being so open about receiving counselling after the fire. She’s encouraged many of our emergency responders and ordinary Londoners to do the same.

And we should thank the brave Transport for London staff, who calmly helped during the attack at Parsons Green station – evacuating the train and leading people to safety – regardless of the risk to themselves.

There’s no doubt that we face a growing threat. Experts say that the number of terrorist attacks this year is not a spike, but a long-term shift.

And crime is on the rise again. The types of crime we see are more complicated and harder to tackle. Violent crime is rising even faster – with too many killed or maimed as a result of knife crime or acid attacks. And ever more young people are being groomed and radicalised by evil extremists – whether here or abroad.

But Conference it doesn’t have to be this way. This all feels very familiar. A weak and divided Tory Government, refusing to face up to the challenges ahead. Bickering and infighting over Europe, putting our jobs and economy at risk. Chronic underinvestment in public services causing a crisis in our schools and hospitals. And crime on the rise.

But Conference, this isn’t the 1990s. This is now. It’s like Back to the Future, but it isn’t funny. Tory cuts to our emergency services have made it harder to keep us safe. A billion pounds cut from the Met Police – a billion pounds less for London’s policing budget.

The result? Fewer police officers on our streets. Police stations closed. And neighbourhood policing under attack. Even police counter-terrorism funding has been cut in real terms. The same goes for our fire service. Fewer fire engines. Fewer fire stations. And fewer fire fighters.

The same story is true in our National Health Service, our councils, our transport network and in every one of our public services.

Conference – we simply can’t go on like this. The brave men and women of our emergency services can’t do their job when the Tories are cutting their funding every year.

It must stop. The Government must give our emergency services the real-terms increase in funding that they desperately need – and right now.

You know, the Tories used to describe themselves as the party of law and order. Well that sounds like a bad joke today. And frankly, as a former Home Secretary, Theresa May should be utterly ashamed of her record.

It’s Labour – in London, Manchester, Liverpool and Wales – that has a real plan to tackle violent crime – like gun crime, knife crime and acid attacks. It’s Labour that’s finally making social integration and community cohesion a priority so we can put a stop to the grooming and radicalisation of our young people.

It’s Labour that’s finally made hate crime and violence against women and girls a top priority for the police. And it’s Labour that’s restoring community trust in our police, and making our emergency services more reflective of the communities they serve.

And you know what? They were both appointed on merit as the best people for the job.

Conference, despite the challenges we’ve faced over the past year – I’m optimistic, positive and hopeful about our future. I’m so proud to call myself British and to call myself a Londoner. I’m confident that both London and the UK have bright futures ahead. That we can become a more prosperous, safe and equal country.

And, Conference, I’m optimistic about Labour’s future too. Optimistic that we’ll build on the success of Labour in power in London, Manchester, Liverpool and Wales. That we’ll make more progress in the local elections next year.That we’ll make a huge difference to the lives of millions. That we can build a fairer Britain. A more prosperous Britain. A safer Britain.

And that Labour under Jeremy Corbyn will win the next general election.