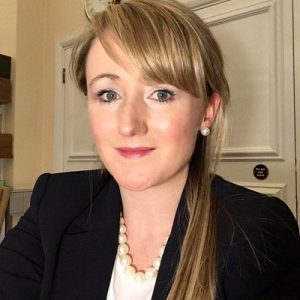 Below is the text of the speech made by Rebecca Long-Bailey, the Shadow Secretary of State for Business, Energy and Industrial Strategy, at the Labour Party Conference in Brighton on 25 September 2017.

Conference, when I was little, my dad would tell me stories of his job in Salford, unloading oil tankers. How we were known as “the workshop of the world”. Life was good for us back then. My dad’s work was unskilled, but it paid well. My parents even managed to get a mortgage for their own little house.

And from poverty-plagued childhoods, which made the film Angela’s Ashes look like an advert for a luxury minibreak, they felt proud of their achievement! And that was true of so many working class people right across Britain, for the first time in history they were truly being offered the chance to aspire!

But under Thatcher industries such as my father’s were put into what is so callously called ‘managed decline’. It meant factories shutting their doors, firms moving abroad or simply closing down, lower wages for those who could still find work, and cuts to benefits for those who couldn’t.

We now have the most regionally imbalanced economy in Europe. 40% of our economic output comes from London and the South East alone. And despite the pretence that we have ‘full employment’, we know the figures hide a worrying truth:

When the Prime Minister called the general election in spring, we were 20 points behind in the polls. The seven weeks that followed saw the biggest narrowing of the polls in British electoral history.

There were many things that contributed to that turnaround. The passion, integrity and strength of our leader, Jeremy Corbyn. The hard work of the Shadow Cabinet, not least my brilliant team Chi Onwurah, Alan Whitehead, Barry Gardiner, Bill Esterson, Jack Dromey, Gill Furniss and Dan Carden. The hard-work and dedication of every single person in this hall and in our movement.

But there were other key factors at play. A country fed up with the dogmas of political and economic neglect that, for so many, had only meant so much hardship. And a Manifesto that showed them that it didn’t have to be this way. When we promised an industrial strategy to end the economy’s reliance on the City of London. To properly fund our public services by making the top 5% pay their fair share. And to invest in our energy, transport and digital infrastructure to make it fit for the 21st Century

When we promised to take the radical action needed to tackle climate change,

and ensure that 60% of our energy comes from low carbon or renewable sources by 2030. To support projects like Swansea tidal lagoon and Moorside nuclear plant.

When we promised to introduce a £10 living wage. And to level the playing field between small and big business. We offered a vision of hope. And we offered transformation! Because we know what lies ahead.

Conference, we are standing on the precipice of the fourth industrial revolution,

a pace of technological and digital change so immense it will leave you feeling dizzy.

But it will only do this if a Labour Government is holding the reins.

Now I know it’s hard to believe but I was 38 the other day. Just 20 years ago, on my 18th birthday, you had to dial up the internet, you checked your lottery numbers on teletext, my first mobile only received ten text messages, and you taped things off the telly with a cassette, which if, like in our house, you were at the cutting edge of 1990’S interior design, you kept them in those plastic boxes designed to look like books.

But people in their teens today have no idea what most of those things are.

And the pace of change we have seen in the last 20 years will pale in comparison to the next 20. Over the last few centuries, we have gradually learnt how to transfer more and more human skills to machines. With current technological breakthroughs, we are, for the first time, designing machines that do cognitive and non-routine work.

But, with some estimates suggesting that half of all jobs could be lost to automation,

and that few businesses are ready to harness change, it also brings the threat of rising poverty and inequality. There is no doubt about what the digital age will look like under the Tories: monopoly profits for the few, and increased exploitation for the many.

Only Labour will ensure that workers and businesses are equipped to enjoy the prosperity this changing economy can bring.

We’ll restore the rights of workers – rolling out sectoral collective bargaining and guaranteeing unions access to the workplace – to ensure that new technology is not just an excuse for disgraced old employment practices. Because there is nothing cutting edge about hire-and-fire, casual contracts.

We’ll create the conditions for business to make those really ‘transformative’ discoveries which can change all our lives for the better, with an industrial agenda that is so transformational, it will eclipse the new deal set out by Franklin D Roosevelt in the history books.

And our National Education Service will allow every single person in this country to obtain the skills they need to thrive in a modern economy and ensure real diversity in our workplaces.

But it’s not enough for Britain to innovate. We’ll put Britain at the forefront of industrial manufacturing, so that the ideas conceived in Britain are manufactured and delivered here in Britain. ‘Made in Britain’ will not just be an idealistic vision of times gone by, it will be a source of national pride for future generations.

And finally, we’ll ensure that workers themselves can have a stake in our industrial journey alongside business.

Imagine if the technology which allows us to hail a taxi or order a takeaway via an app was shared by those who rely on it for work. They would have the power to agree their own terms and conditions and rates of pay, with the profits shared among them or re-invested for the future.

That’s why we are today launching a Report on Alternative Models of Ownership.

To start asking fundamental questions about how we achieve real diversity of business in the digital age, and how to ensure that it’s enormous potential benefits serve the many, not the few.

We either seize the possibilities it can bring us, technological advancement,

living standards and leisure time, that even Harold Wilson in the white heat of technology couldn’t have dreamed of! Or we let the Tories consign our heritage as a proud industrial nation to the dustbin of history.

As Klaus Schwab the Founder and Executive Chairman of the World Economic Forum once said:

“There has never been a time of greater promise, or greater peril.”

But we are ready! Together we will harness the fruits of the extraordinary changes that are coming. A society with more potential than any before, but built for the many, not the few. Conference, this is our time now!