Below is the text of the statement made by Patrick McLoughlin, the Secretary of State for Transport, in the House of Commons on 12 October 2015.

On 30 September (2015), I was pleased to confirm that work to electrify TransPennine and Midland Mainline railways would resume under plans announced as part of Sir Peter Hendy’s work to reset Network Rail’s upgrade programme.

Sir Peter Hendy, the Chair of Network Rail, outlined to me how work could continue. I replied to him asking Network Rail to un-pause this work.

Network Rail will work with the Department for Transport (DfT) and Rail North to develop a new plan for electrification of the TransPennine line between Stalybridge and Leeds and on to York and Selby to focus on delivering key passenger benefits as quickly as possible. This is an improvement on the previous plan which only changed the power supply of the trains.

The new plan will deliver faster journey times and significantly more capacity between Manchester, Leeds and York. The upgrade is expected to provide capacity for 6 fast or semifast trains per hour, take up to 15 minutes off today’s journey time between Manchester and York and be complete by 2022. When the work is finished, the whole route from Liverpool to Newcastle (via Manchester, Leeds and York) will be fully electrified and journey times will be significantly reduced compared to today’s railway.

Network Rail will also recommence work to electrify the Midland Mainline, the vital long-distance corridor which serves the UK’s industrial heartland. Sir Peter Hendy proposed that line speed and capacity improvement works already in hand are added to, with electrification of the line north of Bedford to Kettering and Corby by 2019 and the line north of Kettering to Leicester, Derby/Nottingham and Sheffield by 2023.

New Northern and TransPennine rail franchise awards will be announced before the end of the year. The new franchises will deliver new train carriages and remove out-dated Pacer trains; introduce free Wi-Fi on trains; and offer a one-third increase in capacity with 200 additional services on weekdays and Saturdays and 300 more train services on Sundays.

Connecting up the great cities of the north is at the heart of our plan to build a Northern Powerhouse. The total programme of rail electrification and upgrades will completely transform the railways for passengers in the north and Midlands and help ensure that every part of Britain benefits from a growing economy. 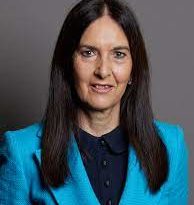