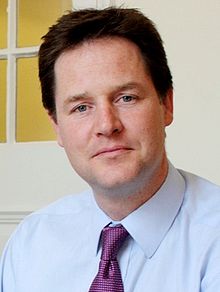 Below is the text of the speech made by Nick Clegg, the then Deputy Prime Minister, at the UKTI Manufacturing Conference held on 10 August 2012.

Nick thank you very much and thank you all very, very much for being here this morning for this excellent event.

I was at the Olympic Park yesterday like a lucky number of others watching Nicola Adams win the first gold medal, medal ever for a woman boxer in this new Olympic phenomenon female boxing. And it was such an uplifting celebration of talent and grit and determination and such a wonderful response to all the cynics and naysayers that Nick referred to and travelling here this morning I thought to myself that in many respects that celebration of success and that rejection of cynicism and pessimism is exactly what we should dwell on here this morning when we consider the strengths and potential in Great Britain for our advanced manufacturing and engineering sectors.

Because for far, far too long we’ve laboured under the wrong narrative which has undervalued our successes in this area and undervalued our future potential as well. For far too long there has been almost a sort of hidden, unspoken assumption that inventing, designing and manufacturing, exporting things is part of the sort of past legacy of our manufacturing heritage, but that the future is all about services, that going in to boring subjects like engineering and science is the wrong thing, that what you should do is always aspire to go in to the whizz bang service industries – accountancy, lawyer, the City, City – and so on.

And that is a dramatic misreading of our national strengths as a national economy and I really just want to in a very few minutes make three basic points, highlight our strengths as a global power for manufacturing and engineering. Secondly emphasise how determined we are as a Coalition Government to do more to expand on those strengths and thirdly to underline the importance I attach and we attach to inspire just as young people have been inspired by the Olympics, to inspire the next generation to dream of being the, the new Brunels and Stephensons of the future.

So firstly our, our strengths. It is just worth repeating how important so many of you are in the fabric of our British economy, some of the most successful companies in the world operate – Airbus, (indistinct) Jaguar and Land Rover – all of whom are very, very welcome sponsors of this event and Nissan, Siemens, BAE and so many other dynamic businesses represented here. We have the second largest aerospace industry in the world.

Despite the very disappointing trade statistics that were published overnight last night, we nonetheless saw that in the early months of this year the United Kingdom has, was exporting more cars than we import for the first time since 1976. A quarter of all Ford engines are made here, eight out of twelve Formula One teams are based here for good reason, because of access to skilled engineers and cutting edge technology.

It is a sector advanced, advanced manufacturing, responsible for almost three quarters of business research and development in this country and in so much of that research and development we lead the world in neuroscience, computer science, ecology, energy, material science and so on. And we pride ourselves that we also have strengths, natural strengths, (indistinct) that we are right at the heart of the world’s largest borderless single market right on our doorstep in the European Union, all of those strengths are strengths which we must celebrate because they are very, very phenomenal strengths indeed.

We need however as I said secondly to do more to build on those strengths and I won’t, because it’ll consume too much time and I know that Vince Cable and others will go in to this in greater detail later, enumerate all the measures that the Government has taken, but whether it is the new technology innovation centres, that try and emulate some of the world’s best examples of clustering academic excellence with advanced manufacturing research; whether it’s our very ambitious plans in infrastructure (indistinct) long term productivity of the economy so heavily depend; whether it’s the commitment to a high speed train spine up and down the length of the country, whether it’s the new guarantee scheme that we have recently announced using the strength of the Government’s balance sheet to mobilise private sector infrastructure and investment infrastructure; whether it’s the Green Investment Bank, the first of its kind, (indistinct) using three billion pounds worth of public money to leverage in several times that private sector money in our new renewable energy infrastructures.

Those are all examples of commitment to infrastructure which is so necessary to your work, whether it’s rebalancing the sectorally unbalanced pattern of British, the British economy over, which has built up over the last two or three decades where so much growth is concentrated in the City of London, the South East and not enough is concentrated in what has become regions elsewhere in the country, in the North of the country in particular who’ve become over reliant on public sector subsidy. We’re using instruments like the Regional Growth Fund, two and a half billion pounds worth of direct finance from the Government to companies and particularly to manufacturers elsewhere outside the South East of the country who are committed to diversifying their businesses, creating jobs and creating greater private sector dynamism in other parts of the country.

Those are just some of the examples of what we are doing. We’ve already launched, already implementing in the last two and a half years to build on those successes. But as I said at the outset, the final point I’m going to make to you before taking questions and comments from you is the importance of the, and the Olympics, the slogan is inspire a generation. I think we together, everybody in this room, the politicians and you in industry, we need to work together to inspire a generation so that unlike, I’m forty five, when I was at school I wasn’t the greatest at science and maths, but nonetheless no one suggested to me or to my friends at school at the time that maybe we wanted to dream of being engineers, of being, going in to industry, going in to manufacturing. This was, this was the early Eighties and it was all about making a fast buck in the City of London or going in to the glamorous industries of advertising or the media. There was no positive image visually given to our youngsters of an alternative career path. That has to change and thankfully it is changing.

I’ve got three little sons. I want my sons to dream of doing what their grandfather and their great grandfather did who were in different capacities, scientists and industrialists and, and manufacturers. And we’re committed to do that, whether it is, notwithstanding all the difficult cuts we’ve had to introduce in public spending, protecting public spending on science, whether it’s the reforms that we are introducing in order to ensure and guarantee that our universities remain amongst the very best universities in the world; whether it’s the expansion of apprenticeships on a scale that has not been seen in this country in the post war period, we’re delivering a quarter of a million more apprenticeships during this Parliament than was planned by the previous administration; whether it’s the creation of twenty four new university technical colleges which specialise in subjects like advanced manufacturing, engineering and health technologies; whether it’s the new Queen Elizabeth Prize for Engineering which was launched, which is an international prize with a million pounds from us in order to celebrate and highlight the best achievements in engineering; whether it’s the network of around twenty eight thousand volunteers we’ve had from academia and industry who are going in to schools to get children enthused about a career in science and technology.

All of those things and more are the kind of things we need to do together to make sure that we don’t regard our manufacturing excellence as something which only belongs to the past and present, but it’s also absolutely crucial to a thriving and prosperous future for the United Kingdom in the years to come as well. Thank you very much for listening to me.