Below is the text of the speech made by Alan Johnson, the then Work and Pensions Secretary, to the CBI Pensions Breakfast on 25th February 2005.

It’s a great pleasure to have this opportunity to talk to you this morning – and to be giving my second speech in under 12 hours here at the Birmingham International Convention Centre.

Last night I was presenting the awards for the Birmingham Employer Coalition, celebrating the achievements of jobseekers who had overcome barriers to work and employers who had recruited and developed Jobcentre Plus employees.

I talked about our aspiration to move towards an employment rate equivalent to 80% of the working age population – the progress we’ve made –- and the work that is still needed to break down the barriers that prevent disabled people, lone parents, ethnic minorities and older workers from fulfilling their aspirations in the workplace.

This isn’t just about the individuals themselves. Neither employers, nor society as a whole, can afford to be denied the skills and contributions of all those who are willing and able to work. It makes good business sense and of course, it’s crucial to our ability to meet the challenges of our ageing society.

These challenges are very real. In the UK today, centenarians are the fastest growing demographic group.

Given this expanding longevity and a lower birth rate, we set up the independent Pensions Commission to identify the extent of the challenge we face.

Whilst making clear that there is no crisis today, they emphasised that we had been living in a fools’ paradise as far as pensions are concerned since the late 1970s – and that this would develop into a crisis in 20 to 25 years time, if we didn’t begin to plan for that future soon.

Yesterday, we published a document which sets out our principles for pension reform and which seeks to establish a national debate as a first step towards building a new consensus on the way forward.

I’d like to focus my remarks this morning on these principles for reform and to say a bit about how employers can work with us – by engaging in this national debate and joining us in forging this new consensus.

Reforming the system to meet the challenges of tomorrow does not mean discarding the strengths of a system that is today delivering better average retirement incomes than any previous generation has ever enjoyed.

Pensioners today are sharing in the growing prosperity of the nation. Between 1996/97 and 2002/03, average pensioner incomes grew by 19%, while average earnings grew by 12%.

Since 1997 we’ve taken radical action to tackle pensioner poverty – lifting 1.8 million pensioners out of abject poverty – and tackling the real pensions crisis that we faced when we came into office.

Over 3.2 million pensioners are now in receipt of Pension Credit – with take-up strongest amongst the very poorest. For those who would otherwise be below the Guarantee element, our best estimate is that take-up rates are running at over 80%. And for single women in this group, take-up could be as high as 90%.

We are starting to change what it means to be old in our society.

Since time immemorial, old age has been associated with poverty – from the workhouse, through the studies of William Booth, to the 1980s when many pensioners had to choose between heating and eating.

But figures from the Institute for Fiscal Studies show that we are now in an unprecedented position where pensioners are no more likely to be poor than any other group in society.

We believe that the prevention of poverty must be a fundamental role for the State – so tackling poverty is our first principle and we will not risk condemning pensioners to the poverty of the past.

The other great strength of today’s system is its sustainability. Sustainable public finances are a pre-requisite to achieving high and stable rates of long-term economic growth and to ensuring that spending and taxation impact fairly between generations.

Our current policies and projections see state pension expenditure remaining broadly stable as a percentage of GDP through to 2050.

This compares very favourably with a number of European countries – who face steep increases in public expenditure over the coming years.

So whilst engaging with ideas for reform, we must ensure that this principle of fiscal sustainability is maintained.

The third principle for pensions reform is coherence. The Pensions Commission observed that the UK has one of the most complex pensions systems in the world, reflecting the cumulative impact of many changes and decisions over the last few decades.

We’ve already made some progress in addressing this problem through the radical simplification of the tax system contained in the Finance Act.

In April 2006 we’ll sweep away today’s 8 separate tax systems for pensions, and replace them with a single regime based on a lifetime limit which will start at £1.5 million, and will rise in stages, faster than the rate of inflation over the next few years.

The layer-cake of regulation – baked in a very slow oven – creates real disincentives. Rights built up over the years need to be recorded and processed separately to reflect the regime in place at the time they were accrued.

This can be a nightmare for employers.

So we must go further with our simplification agenda – especially to make our pensions system easier for people to understand.

Our fourth principle is to seek a broad consensus.

The NAPF claimed a consensus for the idea of a Citizens’ Pension set at £105 a week, replacing the Basic State Pension and the Second State Pension.

But the CBI and many others oppose this – favouring less costly approaches and the maintenance of an earnings-related tier.

So we haven’t ever really had a lasting political consensus that gives people the ability to plan ahead with confidence.

The Pensions Commission provides an opportunity to start to build such a consensus – which we intend to grasp.

Politicians are squaring up for an election so consensus is perhaps a tad unlikely right now – but we can and should steer clear of unaffordable and ill-thought-out promises if we are to avoid a return to the fools’ paradise that the Pensions Commission so graphically described.

There are six principles which we believe should be at the heart of any future reform. I’ve covered four of them so far – tackling poverty, maintaining fiscal sustainability, achieving greater simplicity and building consensus.

The final two are perhaps the most challenging and definitely the most urgent.

Inclusiveness – the opportunity for all to build an adequate retirement income; and

We have already taken important steps forwards here. The State Second Pension means that nearly 6 million low earners – two-thirds of whom are women – as well as 2 million carers and over 2 million disabled people all have the chance to build up a decent second pension for the first time.

Through the Pension Protection Fund – and other measures in the Pensions Act last year – we have taken radical steps to bolster security and confidence in occupational pensions. This includes offering some financial assistance to those who have lost the most in the past.

Stakeholder pensions and the Sandler products mean more flexibility – for example, people are now free to change provider and to stop and start payments without suffering penalties – particularly important for women and carers.

And our Age Discrimination Legislation and improved terms for State Pension Deferral mean that people have greater opportunity and rewards for working longer.

But we need to do more to make it easier for people to save. We need to work with you, as employers, to explore ways to encourage greater employer pension contributions and sharing of good practice.

Next week I am launching a single Government-sponsored website on Good Practice – resulting from the work of our Employer Task Force.

There is much good practice and much that employers can be proud of in the way they have continued to provide decent occupational schemes in difficult times.

I’m also keen for us to develop auto-enrolment so that 4.6 million workers no longer miss out on the contributions of their employers, unless they actively decide to do so.

And that we should look at whether there is scope for developing more collective products using local or central collection mechanisms – for instance, using the machinery of the National Insurance system, possibly on an auto-enrolment basis, to help people save and to secure lower charges for savers.

Finally, we need to end the current bias against women in the Basic State Pension.

The National Insurance system has delivered poor pension outcomes for women – especially for those who have taken time off paid work to raise a family.

It is a national scandal that on average today’s single women pensioners have an income £24 a week lower than single male pensioners – with only 16% of newly retiring women today qualifying for a full Basic State Pension on the basis of their own contributions.

This can not be right. Beveridge’s vision was for a very different world where men had 50 year jobs and a 40 year marriage to a woman who they expected to provide for.

We need a radical improvement in womens’ entitlement to the Basic State Pension, particularly as pension ages for women are raised to age 65.

One of the key questions that we are asking in launching this national debate is whether the gains from a residency-based eligibility for the Basic State Pension would provide a cost-effective and practical alternative way of improving equity of entitlements.

There are a number of ways we can solve this problem, but solve it we must.

Tackling poverty, maintaining fiscal sustainability, greater simplicity, a new consensus, inclusiveness and equitability – these are the six principles that will be at the heart of any reform.

The Pensions Commission process represents a unique opportunity to establish a consensus behind pension reforms that will last for the long term. It’s an opportunity that we must seize.

The Commission will provide recommendations on private sector pensions in the Autumn.

All the Commission’s recommendations, will be best received in an environment of informed and considered debate.

Ahead of these recommendations, the Government will seek to engage with the public – and all our key stakeholders – over the principles we’ve set out. In this way we hope to achieve a shared framework of criteria within which the recommendations of the Commission and others can be assessed.

I know the CBI will be a major voice in this debate – and I thank you for your time this morning. 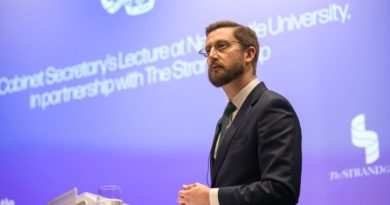