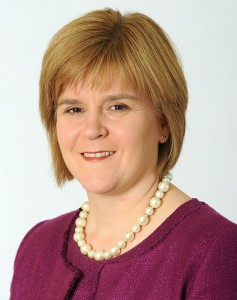 Below is the text of the speech made by Nicola Sturgeon on 3rd October 2012.

It’s always good to start on a note of consensus, so let me say that there is one thing that I agree with Johann Lamont about.

We do have big questions to ask and to answer about the future of Scotland – about the kind of country we want to be.

So I don’t criticise Johann Lamont for asking the questions.

But, unlike her friends on the Tory benches, I take issue with the conclusion she has reached.

It’s a conclusion that has its roots in the deeply misguided belief of Labour that this parliament should be responsible for divvying up the national cake but have no power to influence the overall size of that cake.

A conclusion – no matter how much she tries to duck and dive and deny that this benefit or that is under threat – that puts at risk many of the hard won social policy victories of this parliament, like free personal care.

And policies, like the council tax freeze, that just five months ago were backed wholeheartedly by Labour when they promised to continue it for another 5 years.

We’ve had Nick Clegg apologising for breaking his promises in government – Labour must be the first party on record to manage to break its promises from opposition.

It would be funny if it wasn’t so tragic. It beggars belief that a Labour leader would reach the conclusion that the best response to Tory cuts is to take away benefits and opportunities from pensioners, the sick, families already struggling to make ends meet and working class kids who aspire to a university education.

And how does Johann Lamont describes policies designed to take a bit of the pressure off household budgets, to give our elderly some dignity and peace of mind in their later years, to ensure that education is not the preserve of the wealthy but open to all who have the ability to learn?

She calls these policies part of a ‘something for nothing’ culture.

What an insult to those who work hard, pay their taxes, save what they can and simply expect that their government gives them something back in return.

What a betrayal of the values that once defined the party she leads. The party of Nye Bevan reduced to attacking the very principle of universality.

Now, Labour tries to say it’s about making the well-off pay more – that it’s about people like her and me.

It’s the pensioner in my constituency – who has worked all of her life – who told me recently that before concessionary travel, she rarely got to see her elderly sister who lives in Inverness but is now able to do so regularly.

It’s the woman with a serious, life-limiting chronic condition – earning little more than £16,000 – who told me that she had often had to choose which of her medicines to take because she couldn’t afford to take them all.

It’s the dementia sufferer whose free personal care might just make the difference between her having to sell her family home or not.

And it’s the young person from a working class family who dreams of going to university but knows that, no matter how supportive and encouraging her parents are, she would never be able to if she had to pay tuition fees.

And since Johann Lamont likes to make these things personal, let me tell her this: that one is about me because it is exactly the position I – and I am sure many others in this chamber – was in.

We are beneficiaries of free education – we have no right to pull up the ladder of opportunity and deprive today’s young people of what we were able to take for granted.

So, presiding officer, these are the people that Johann Lamont has chosen to make this debate about.

No wonder voices in her party are calling it chaotic and shambolic.

And no wonder the Tories are queuing up to congratulate her.

Because these are the people she thinks should bear the brunt of Tory cuts – the people that she would subject to the indignities of means testing for their bus pass or their personal care.

We will protect the council tax freeze, free education, bus passes and personal care for our elderly and the principle of healthcare free at the point of need.

We will continue to do so within a balanced budget – a budget that every year is presented to this parliament for the kind of debate that Labour say they want.

A budget that, yes, is being cut by the Tory government that Labour is so keen to team up with, but that will nevertheless strive to boost growth, protect jobs and household budgets and make Scotland a fairer place to live.

A budget that despite the nonsense talked by Labour, has and will continue to be informed by the Beveridge and Christie reports – whether that is in our approach to preventative spend, our focus on efficiency, our difficult decisions on pay restraint or our ambitious programme of public service reform.

We have and will continue to take the tough decisions. We will make our choices and stand by them.

And let’s not forget that the choices we have made were overwhelmingly endorsed last year by the Scottish people.

But the choices we make within the fixed budget we have at our disposal are not the only differences between Labour and the SNP.

Nor, perhaps, are they even the biggest.

The fundamental difference is this.

Labour is happy to accept a future for Scotland that has us simply deciding how to pass on Tory cuts. We are not.

The real tragedy of Johann Lamont’s speech is that she has allowed herself to be imprisoned in a Tory straitjacket, accepting forever the inevitability of decisions taken elsewhere.

Accepting a situation where we have the responsibility for dividing up the cake, but no power to influence its size.

We think differently.  We want all of Scotland resources to be available to this parliament so that we can seek to chart a different course and shape a different future.

I have said before and I will say again, independence is not a magic pill. It will not take away the difficult financial climate that we live in – thanks in no small part to the economic mismanagement of successive UK governments. Nor will it remove at a stroke the difficult decisions that flow from that.

But it will open up different choices.

In Johann Lamont’s world, the only choice is whether to punish the pensioner or the student, to pass on cuts to the sick or to the family struggling with council tax.

With independence, we will have different choices. We will have the ability to make economic choices that might get our economy growing faster so that revenues increase.

We will have the choice to shape a welfare system that seeks to reduce welfare costs by lifting people out of poverty, rather than have imposed on us one that pushes people deeper down into poverty.

And we will have the choice – the real choice – not to spend hundreds of millions of pounds on Trident nuclear weapons and invest instead on the things that really matter.

So that’s the real debate – the one that this country needs to have.

It’s a debate about who is going to determine the choices that define our politics. Who is going to shape our future as a country?

A right wing Tory government or this parliament and the people whose lives are affected by the decisions we take.

I know this wasn’t Johann Lamont’s intention, but I have no doubt that her interventions of the last week will lead many more people to the latter option – to the conclusion that our own destiny should be in our own hands.

The conclusion is that Scotland will be better off independent.