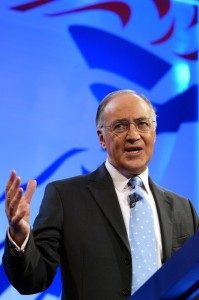 Below is the text of the speech made by Michael Howard, the then Parliamentary Under-Secretary of State for Trade and Industry, in the House of Commons on 14 February 1986.

I congratulate my hon. Friend the Member for Bury, North (Mr. Burt) on raising the subject of the British paper industry. He represents a constituency in an area that has a concentration of paper and board mills. I know that both he and my hon. Friend the Member for Bury, South (Mr. Sumberg) are closely interested in the fortunes of the industry and wish to see it succeed and prosper. I share that objective.

This is a timely debate because it will help to register publicly that the United Kingdom has a substantial, forward-looking industry well able to meet the needs of customers here and abroad. The industry suffered badly in the recession with many closures of mills and machines, but it has been fighting back and is keen that more customers should fully recognise its capabilities —as many do already.

There are some notable investment projects both by traditional United Kingdom producers and by overseas investors. In my county of Kent, Bowater at Kemsley has recently spent £12·5 million on rebuilding a paper machine and on the latest converting and packing equipment. The company now has an impressive, large, modern facility with which to challenge other European suppliers. In addition, Reed at Aylesford has rebuilt its newsprint machine to improve its efficiency and product quality. Near Aberdeen, Thomas Tait and Sons is investing £20 million to build the largest fine paper machine in the United Kingdom, again equipping the company to compete successfully in Europe. Multi-million pound investment programmes have been carried out by other United Kingdom companies too, including Wiggins Teape, GP-Inveresk and Tullis Russell.

In many mills new computerised process control equipment has helped product quality and efficiency. The industry claims a 39 per cent. increase in output per man since 1979 among the mills making printing and writing paper — which account for over a quarter of the industry’s production. The sector of the industry which has seen the most dramatic recovery is newsprint. By 1983 production had fallen to some 80,000 tonnes, or only some ​ 5 per cent. of United Kingdom demand, but the United Kingdom has secured two major inward investment projects.

Consolidated Bathurst of Canada has invested some £50 million to modernise and reopen a mill at Ellesmere Port. United Paper Mills of Finland has invested £130 million to build a new integrated pulp and paper mill at Shotton in North Wales. This new mill was opened by his Royal Highness the Prince of Wales in December, having been completed ahead of schedule. These are excellent examples of the kind of inward investment that the Government are keen to encourage. The industry can now satisfy about a third of United Kingdom demand for newsprint, and I hope that this capacity will be fully utilised.

Where investment projects have satisfied the relevant criteria, Government assistance has been offered to enable them to go ahead. For example, the Bowater Kemsley project received selective assistance of £1·5 million under section 8 of the Industrial Development Act. Regional selective assistance totalling £6·5 million was offered for the two large newsprint projects at Bridgwater and Shotton. There have been smaller assisted projects too.
A number of companies have undertaken coal firing projects with Government assistance. In some other cases, investment projects have helped to demonstrate innovations in energy efficiency and it has been possible to offer assistance under the energy demonstration scheme. In 1984 the industry is reported to have invested over £6·5 million in energy-related capital projects with an average expected payback of 1-6 years.

The industry is increasingly committed to its energy management monitoring and targeting programme developed in close co-operation with the Department of Energy which has provided financial support. I congratulate the industry on its efforts. I would also like to take this opportunity to acknowledge the hard work and commitment of the British Paper and Board Industry Federation, whose staff has done so much to develop the programme and encourage member companies to apply it. In 1984, the industry used 5 per cent. less energy than in 1983 to produce 12 per cent. more paper and board.

My hon. Friend the Member for Bury, North has made a number of interesting points in his speech, to which I now turn. He referred to interest rates and the importance of keeping them as low as possible. I am sure that he recognises that interest rates will continue to be held at the lowest rate that is consistent with the need to maintain monetary conditions and keep steady downward pressure on inflation. Inflation would cause far more damage to industry if it were to take hold again. The recent moves on interest rates reflect our determination to ensure that it does not.

I appreciate the significance to the industry of exchange rates, but they are ultimately determined by the underlying competitive strength of our economy and the economies of our trading partners. Greater stability in the exchange markets is clearly desirable, but no country can achieve that single handed.

We aim, therefore, to achieve it through co-operation with our major trading partners. An example of that was the agreement of the Group of Five countries last September that orderly depreciation of the dollar was desirable.

Since then, the dollar has moved towards a more sustainable level and the pound has declined against the mark, the franc and the yen. ​ My hon. Friend mentioned membership of the exchange rate mechanism of the European monetary system. The Government are ready to join the exchange rate mechanism when we judge that the conditions are right, but the decision must be carefully weighed. Sterling is widely held and traded internationally, and it is subject to different and often opposite strains from currencies that are already in the exchange rate mechanism. Furthermore, it is by no means certain that opinion even in the paper industry is unanimous on this matter.

The changes in capital allowances are in line with the Government’s policy of simplifying the tax system and eliminating distortions. The burden of tax administration for companies and Government will be reduced, and companies are encouraged to concentrate on identifying and investing in profitable projects. The changes will reduce overall corporate taxation in the longer term. The effect on individual companies will depend on past investment and profitability and on the availability of unused allowances.

Advance notice of the changes has given a secure planning environment. I am aware that the paper federation has already made known the industry’s views on capital allowances in its Budget representations to my right hon. Friend the Chancellor of the Exchequer, and I am sure he will consider them carefully.
My hon. Friend the Member for Bury, North also mentioned alleged dumping of Kraft liner. This is an important matter. I fully appreciate the industry’s concern. Officials from my Department have asked representatives of the industry to provide additional information, including evidence of breaches in the minimum import price. The Department would be glad to review the matter with the industry, and I believe that the industry’s European association is planning to consult again the EC Commission, which has the main responsibility in these matters.

My hon. Friend mentioned oil and the importance of taking advantage of the fall in price. He also spoke about electricity. Electricity prices for most UK consumers are comparable with those on the Continent. The exception is France, where consumers benefit from extensive low-cost nuclear generation. The level of prices is the responsibility of the electricity industry. The Government set the financial framework for the industry to ensure that it earns a proper return. The Government acknowledge, however, that the largest users face higher prices, and we appreciate the difficulties that that causes. Following extensive discussions in the National Economic Development Organisation and with the industry, the Central Electricity Generating Board and the National Coal Board have been working on proposals which could result in lower prices ​ for the most intensive users, as in the paper industry. The proposals have still to be finalised, but I hope that decisions will not be long delayed.

As for the starch regime, I am pleased to say that considerable progress has been made on the proposals of the European Commission, which are designed to help industrial users of starch in the Community. The Council of Agriculture Ministers will be asked to take a decision on modified proposals at its meeting on 24 February. To a large extent, the proposals meet the desires of the paper and board industry.

I listened to what my hon. Friend said about detailed proposals, which he is to send to the Department, for assistance with various new technologies. My Department is always ready to listen to proposals on that subject. Indeed, support is already given for innovative projects which meet the Department’s criteria. The industry has benefited from the relevant scheme. The scheme has been used to assist two projects which are designed to demonstrate to the industry as a whole the benefits of applying new technology. Both are taking place at Thames Board at Purfleet. I am sure that the details are known to those who take a close interest in the industry’s future.

My hon. Friend the Member for Bury, South raised, in particular, the East Lancashire Paper Mills in his constituency, and I am delighted that he was given the opportunity of referring to them. That company has also been preparing for the future. I know that my hon. Friend the Member for Rossendale and Darwen (Mr. Trippier), when Parliamentary Under-Secretary of State for Trade and Industry, met company representatives, and encouraged them to keep in touch with the Department. Following the review of regional policy, the mills are now in an assisted area. My officials in the north-west regional office are happy to discuss with the company the question of assistance for any potential future projects.

The industry is too often remembered for its difficulties. It is now aware of the need to spread the message of its successes. An impressive initiative in that direction is the recent publication of a newspaper about companies which make printing and writing paper. The newspaper draws attention to their strengths, and highlights recent developments, especially the large-scale investment for the future which has taken place. I welcome that positive approach, and I know that the industry is considering other possible initiatives.
I hope that between us my hon. Friend and I have said enough to show that paper and board is an industry looking to the future with more confidence and much to offer its customers at home and abroad. I wish it every success.